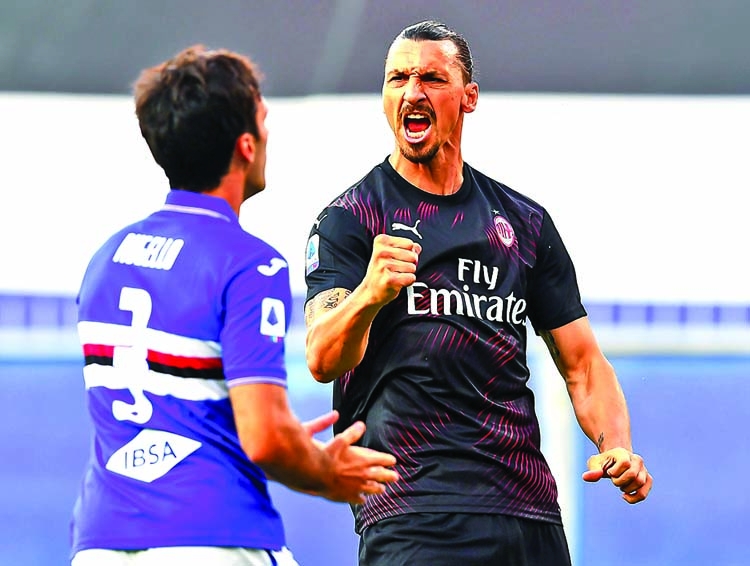 Zlatan Ibrahimovic celebrates the first of his two goals against Sampdoria in AC Milan's 4-0 win. It was his 50th career Serie A goal for the club. -Getty
Zlatan Ibrahimovic claimed to be "like Benjamin Button" after making history with two goals at Sampdoria as the veteran shows no signs of slowing down, reports Goal.com.
Ibrahimovic returned to AC Milan in January and has been as influential as ever in their climb up the table. In a 4-1 win at Samp, the former Paris Saint-Germain, Barcelona and Manchester United striker grabbed two goals - taking his tally to 10 in 2020 - and an assist as Milan made it 12 games unbeaten in all competitions.
In doing so, Ibrahimovic became the first player to score 50 goals for both Milan and city rivals Inter in Serie A. The 38-year-old claimed on social media last week he was "just warming up" and repeated the statement post-match in Genoa.
Ibrahimovic then explained his continued brilliance by suggesting a resemblance to the fictional character who ages backwards. "I'm like Benjamin Button," he told Milan TV, before adding: "I've always been young, never old."
The form of Ibrahimovic and AC Milan has seen head coach Stefano Pioli handed a contract extension at San Siro. The Rossoneri appeared set to instead appoint Ralf Rangnick, but Ibrahimovic is delighted Pioli is staying on, even if his own future remains up in the air.
"I can say only positive things," Ibrahimovic said. "I'm happy for him because he did a great job.
"He worked under pressure without knowing the future. He did a great job and the renewal is deserved. When you work hard, you always get something back.
"I'm happy for him. He deserved this - it was not an easy situation. The team believes in him a lot and I respect him."
AC Milan's latest win - their eighth in Serie A since the Italian top flight resumed in June - keeps them in sixth place, four ahead of Napoli who went down to Inter on Tuesday.
The Rossoneri conclude their 2019-20 campaign on Saturday when they host Cagliari at San Siro, already assured of Europa League football for the coming season.