'Old vaccines may stop the virus' 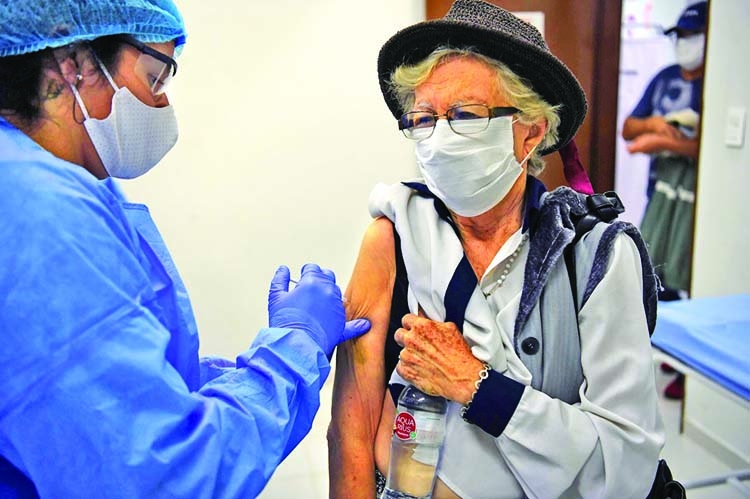 Billions of dollars are being invested in the development of vaccines against the coronavirus. Until one arrives, many scientists have turned to tried-and-true vaccines to see whether they may confer broad protection, and may reduce the risk of coronavirus infection, as well.
Old standbys like the Bacille Calmette-Guerin tuberculosis vaccine and the polio vaccine appear to help train the immune system to respond to a broad variety of infections, including from bacteria, viruses and parasites, experts say.
Now a study suggests that people who have received certain routine vaccines in the recent past - including childhood vaccinations like measles-mumps-rubella and polio, as well as adult flu vaccines - have lower coronavirus infection rates than those not recently vaccinated.
But many experts greeted the conclusions with scepticism. The paper, an analysis of electronic health records from the Mayo Clinic, was posted online; it has not been through the peer review process and has not been accepted by a medical journal.
Critics pointed to numerous methodological problems. It is a retrospective study; as such, it points to an association between vaccinations - a marker of overall good health and healthy behaviors - and lower infection risk.
But the study does not prove a cause-and-effect relationship. While scientists generally consider studies like these useful for generating hypotheses that may be worth exploring further, they are far from definitive.
The researchers analyzed the immunization records of 137,037 patients who had been tested for infection with the coronavirus, comparing matched pairs of vaccinated and unvaccinated patients who were otherwise similar.
Patients had lower infection rates if they had recently been given the high-dose flu vaccine or had been vaccinated against polio, measles-mumps-rubella, chickenpox, pneumococcal disease, hepatitis A and hepatitis B, or haemophilus influenzae Type B, compared with those who had not received those vaccines in recent years.
The level of risk reduction varied, depending on the vaccine and on how recently the individual had been vaccinated. But generally, the childhood vaccinations were linked to a greater reduction in coronavirus infection than the high-dose flu vaccine given to elderly individuals.
And some vaccines, if received five years before the study began, were tied to higher coronavirus infection rates, including the human papillomavirus vaccine and the one against typhoid, as well as the meningococcal vaccine.
The researchers went to great pains to account for variables that might have made a difference, including testing rates and geographic variations in coronavirus rates, as well as demographic factors like age, race and ethnicity, though some critics said these efforts fell short.
"The hypothesis we are testing is that the immune system memory is stimulated by the vaccine," said one of the authors of the paper, Venky Soundararajan, the founder of nference, a company that uses artificial intelligence to synthesize biomedical information.
"Then along comes SARS-CoV-2," he said, "and the immune system is able to get the virus to back off and to clear it, so it can't invade multiple cells and become a full-blown infection."
In one dramatic finding, Black patients who had received the pneumococcal disease vaccine five years before the study had a significantly lower risk of testing positive for the coronavirus, compared with similar patients who had not gotten the vaccine. That vaccine protects against 13 types of bacteria, including some that cause pneumonia.
But experts said the findings should be interpreted with great caution.
"Retrospective studies are great and they provide some hints, but there are caveats," said Dr Shyam Kottilil, a professor of medicine with the Institute of Human Virology at the University of Maryland School of Medicine. "It's very difficult to establish causality."
Interest in the cross-protective effects of vaccines has led to efforts to repurpose old vaccines that may have potential to provide at least transient protection against the coronavirus until a specific vaccine against SARS-CoV-2 is developed and proven safe and effective, he said.
"But nobody knows whether this approach will work unless we test them," Kottilil said. "To endorse this, you need to do really good randomized clinical trials." There is little incentive for private companies to invest in expensive trials because the old vaccines are cheap and off-patent, he added.

Dr Christine Stabell Benn, a professor of global health at the University of Southern Denmark who has studied the potential nonspecific effects of vaccines against infectious diseases, said there is "ample evidence" that live attenuated vaccines can increase resistance to seemingly unrelated infections.
But the new paper suffers from many limitations, she added, among them that the authors did not do enough to create comparable groups of vaccinated and unvaccinated individuals, and did not disentangle the effects of various vaccines.
She was particularly concerned about the so-called healthy user effect: People who have the means and are anxious about their health are most likely both to get vaccinations and also to be tested for the coronavirus, even without symptoms.
That "would lead to strong positive associations between vaccination and having a negative test result," Benn said in an email. "The authors acknowledge this and do something to mitigate the impact, but it remains a big concern."
--- NYT