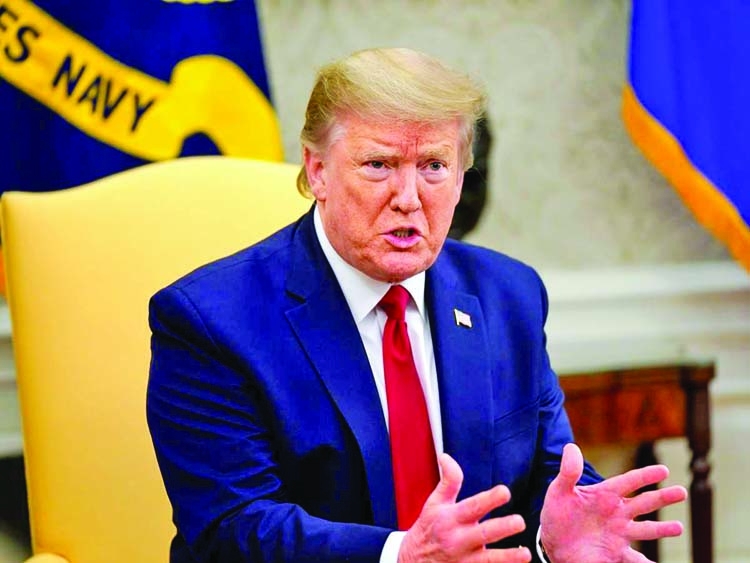 US President Donald Trump on Thursday raised the possibility of delaying the nation's November 3 presidential election despite its date being enshrined in the US Constitution, drawing immediate objections from Democrats, reports Reuters.
It was not clear whether Trump was serious. Any such move would require action by Congress, which holds the power to set the timing of elections.
Trump, without evidence, repeated his claims of mail-in voter fraud and raised the question of a delay, tweeting: "delay the election until people can properly, securely and safely vote???"
Trump's tweet came shortly after the United States reported its worst economic downturn since the Great Depression: a second-quarter crash in gross domestic product due to widespread shutdowns prompted by the coronavirus pandemic.
Trump, who is trailing challenger and former Vice President Joe Biden in opinion polls, had previously intended to focus his re-election bid on the nation's economic performance.
Representatives for the White House did not immediately respond to a request for comment.
Trump has cast doubt on the legitimacy of mail-in ballots, which have been used in far greater numbers in primary elections amid the pandemic. He has also made unsubstantiated allegations that voting will be rigged and has refused to say he would accept official election results if he lost.
Democrats, including Biden, have already begun preparations to protect voters and the election amid fears that Trump will try to interfere with the November election.

"A sitting president is peddling lies and suggesting delaying the election to keep himself in power," Democratic Representative Dan Kildee wrote on Twitter. "Don't let it happen. Every American - Republican, Independent and Democrat - should be speaking out against this President's lawlessness and complete disregard of the Constitution."
US Senator Tom Udall, also a Democrat, said, "There is no way @POTUS can delay the election. We shouldn't let him distract us from his #COVID19 incompetence."
Nonpartisan US election analyst Kyle Kondik of the University of Virginia said the tweet seemed to follow Trump's typical approach of trying to distract voters from bad news.
"Trump suggesting delaying the election (he can't do this w/o congressional approval) seems to be one of his more obvious attempts to change the subject given this morning's wretched GDP numbers," Kondik wrote on Twitter.