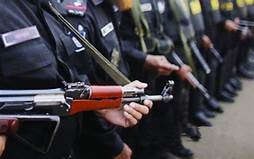 A man has been killed in a so-called shootout with the Rapid Action Battalion in Dhaka's Pallabi.
The dead man was identified as Mohammed Mohsin, 35. He was a 'contract killer', according to the RAB.
The incident occurred in Pallabi's Eastern Housing area early Friday, said RAB-4 Assistant Director Shajedul Islam.
"A RAB patrol exchanged gunfire with a gang of criminals in the Easter Housing area around 3am. Once the gunfight ceased, the law enforcers found a wounded man on the scene and rushed him to Suhrawardy Medical College Hospital where the on-duty doctor declared him dead."
Mohsin had been named in 12 cases, including seven carrying murder charges, according to the elite police unit. He was also involved in the local drug trade.
The shootout took place barely two days after Pallabi police arrested three men suspected of being hired assassins during a raid near Kalshi graveyard.
The men were carrying firearms and a weighing machine containing a bomb which exploded in Pallabi Police Station, leaving five people, including four policemen, injured.
But Mohsin did not have any link with that incident, according to Shajedul.
He would commit crimes in various parts of the city using different aliases, he said.