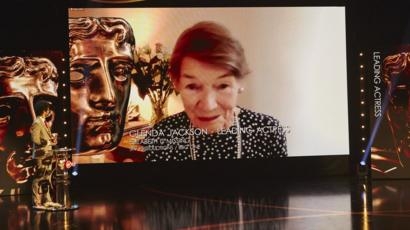 Glenda Jackson has won best actress at the Bafta TV Awards for Elizabeth Is Missing, her first television role in 27 years.
The 84-year-old, who was last nominated for a Bafta in 1974, said she was "absolutely stunned".
Sky Atlantic miniseries Chernobyl, starring Jared Harris, won awards for best miniseries and best leading actor.
The event was held as a closed studio, socially distanced show and awards were accepted virtually.
Host Richard Ayoade made light of the unusual circumstances during a sardonic opening address from BBC Television Centre in west London.
"It's sad it had taken a pandemic to enforce the most basic parameters of personal space," he joked.
The result, he said, would be "the least touchy-feely Baftas to date".
His intro was followed by a satirical song from Tim Minchin about the pandemic's impact on the film, TV and theatre industries.
"If Matilda stays closed, am I still rich?" he sang, referencing his own stage musical in a video filmed in Australia.
The first award of the night went to Mo Gilligan for best entertainment performance.
He was recognised for his Channel 4 programme The Lateish Show, beating Frankie Boyle and previous winners Graham Norton and Lee Mack.
Fleabag creator Phoebe Waller-Bridge lost out to her co-star Sian Clifford for the female performance in a comedy programme award.
A tearful Clifford called her win "stupid, weird and surreal" while insisting the nominees in her category were "all winners".
Jamie Demetriou, who appeared in Fleabag's first series, picked up the prize for male performance in a comedy programme for his role in Stath Lets Flats.
He used his speech to thank a childhood friend for "getting me to do comedy when I was trying to be the bad boy of musical theatre when I was 21".
Stath Lets Flats went on to win the award for best scripted comedy, beating Fleabag, Catastrophe and Derry Girls.