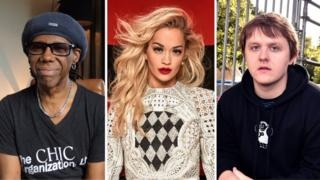 More than 700 people from the UK music industry - including artists, managers, producers and companies - have written an open letter urging people to "stand together" and "wipe out racism now".
Little Mix, Nile Rodgers, Lewis Capaldi and Rita Ora are among the stars calling for an end to racism.
"We are at our worst when we attack one another," the letter said.
It cited recent "anti-Jewish racism", after grime artist Wiley shared anti-Semitic posts. Wiley later apologized.
Hundreds of representatives from the music industry co-signed the letter, which says they want to show "that love, unity and friendship, not division and hatred, must and will always be our common cause".
The stars who have signed it include The 1975, MNEK, Clean Bandit, Yungblud, Labrinth, Biffy Clyro, Mabel, Years & Years, Jess Glynne, Jonas Blue, Niall Horan, James Blunt, Naughty Boy, Grace Carter, and Joy Crookes.
Ed Sheeran's manager, Stuart Camp, as well as Stevie Wonder's manager, Keith Harris, have also signed it, along with the president of EMI and labels such as Universal Music UK, Warner Music UK and Sony Music UK.
'Ignorance'
"Whether it be systemic racism and racial inequality highlighted by continued police brutality in America or anti-Jewish racism promulgated through online attacks, the result is the same: suspicion, hatred and division," it says. "We are at our worst when we attack one another.
"Minorities from all backgrounds and faiths have struggled and suffered. From slavery to the Holocaust we have painful collective memories.
"All forms of racism have the same roots - ignorance, lack of education and scapegoating.
"We, the British music industry are proudly uniting to amplify our voices, to take responsibility, to speak out and stand together in solidarity. Silence is not an option."
The letter adds that music "brings joy and hope and connects us all", adding: "Through music, education and empathy we can find unity. We stand together, to educate and wipe out racism now and for our future generations."
Wiley - known as the "godfather of grime" - recently made headlines after sharing a series of anti-Semitic tweets.
He was dropped by his management and later banned by Twitter, following a public boycott of the social media network.
In an interview with Sky News last week, Wiley apologized for "generalizing" about Jewish people and said: "I'm not racist."
Organizers of the letter said that anyone that wants to add their name to the letter can do so over the coming week.