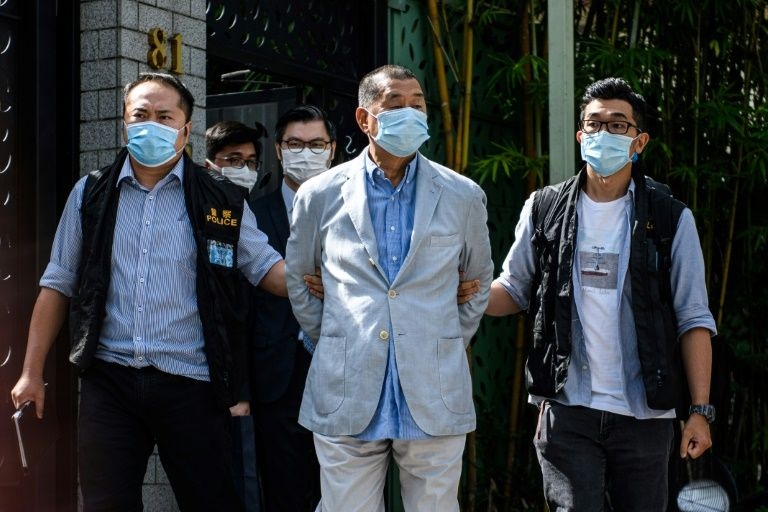 Hong Kong pro-democracy media tycoon Jimmy Lai was arrested Monday and led in handcuffs through his newspaper office as police raided the building, part of a sweeping crackdown on dissent since China imposed a security law on the city.
It was the latest police operation against dissidents under the sweeping new law and sparked a fresh round of condemnation over Hong Kong's stuttering freedoms.
Lai, 71, was among ten people detained on charges including colluding with foreign forces -- one of the new national security offences -- and fraud in an operation targeting his Next Digital publishing group.
Among the others arrested were two of Lai's sons, young pro-democracy activist Agnes Chow and Wilson Li, a former activist who describes himself as a freelance journalist working for Britain's ITV News.
Even as police were conducting interrogations, Beijing hailed Lai's arrest, declaring him an "anti-China rabble-rouser" who conspired with foreigners to "stir up chaos".
US Secretary of State Mike Pompeo, who met Lai last year, tweeted that he was "deeply troubled" by reports of Lai's arrest.
Pompeo described it as "further proof" that Chinese authorities have "eviscerated Hong Kong's freedoms and eroded the rights of its people".
China's new security law was imposed on June 30 and is not supposed to be retroactive.
The most serious national security crimes carry up to life in jail.
In a late-night briefing, police said those arrested were part of a group that had previously lobbied for foreign sanctions.
"After the national security law came into force, this group was still active," senior superintendent Li Kwai-wah told reporters.
APPLE DAILY RAIDED
Earlier in the day, journalists working at Lai's Apple Daily streamed dramatic footage on Facebook as some 200 police officers raided their offices with a handcuffed Lai in tow.
"Hong Kong's press freedom is now hanging by a thread," Apple Daily said, adding it would continue to publish.
Chris Yeung, president of the Hong Kong Journalists Association, described the police action as "shocking and terrifying".
The Foreign Correspondents' Club, Hong Kong said the raid signalled "a dark new phase" that "upended" previous assurances by China and Hong Kong's government that the national security law would not stifle press freedoms.
Activist Joshua Wong tweeted that "today's arrest preludes a new dark era of media censorship," calling it a "painful day".
The security law was introduced in a bid to quell last year's huge and often violent pro-democracy protests.
Similar laws are used on the authoritarian mainland to snuff out opposition.
Authorities have since wielded their new powers to pursue Hong Kong's democracy camp, sparking criticism from Western nations and sanctions from the United States.
Lai's Apple Daily and Next Magazine are enormously popular and unapologetically pro-democracy.
After his arrest, Next Digital shares soared more than 250 percent as supporters made online calls for people to buy the stock.
Early Tuesday, Apple Daily was live streaming again as it went to press. At 2:00 am local time tweets showed Hong Kongers queueing to buy fresh copies.
BEIJING'S NEW LAW
Across the border, few Hong Kongers generate the level of personal vitriol from Beijing that Lai does.
China routinely calls him a "traitor" and a "black hand" behind last year's protests.
Allegations of Lai colluding with foreigners went into overdrive in Chinese state media last year when he met with Pompeo and Vice President Mike Pence.
Lai spoke to AFP mid-June, two weeks before the new security law was imposed on Hong Kong.
"I'm prepared for prison," he said.
He described Beijing's new security law as "a death knell for Hong Kong" and said he feared authorities would come after his journalists.
He also brushed off the collusion allegations, saying Hong Kongers had a right to meet with foreign politicians.
Beijing's new law targets secession, subversion, terrorism and colluding with foreign forces.
Its broadly worded provisions criminalised certain political speech overnight, such as advocating sanctions, and greater autonomy or independence for Hong Kong.
Critics believe the law has ended the key liberties and autonomy that Beijing promised Hong Kong could keep after its 1997 handover by Britain.
The law's introduction has coincided with ramped-up police action against democracy supporters.
About two dozen -- including Lai -- have been charged for defying a police ban to attend a Tiananmen remembrance vigil in early June.
Lai and many others are also being prosecuted for taking part in last year's protests.
Last month, a dozen high-profile pro-democracy figures were disqualified from standing in local elections for holding unacceptable political views.
The banned opinions included being critical of the security law and campaigning to win a majority in the city's partially-elected legislature in order to block government laws.
Shortly after the disqualifications, city leader Carrie Lam postponed the elections for a year, citing a surge in coronavirus cases. -- AFP