Bangabandhu's killing was part of plot to destroy BD: Hasan 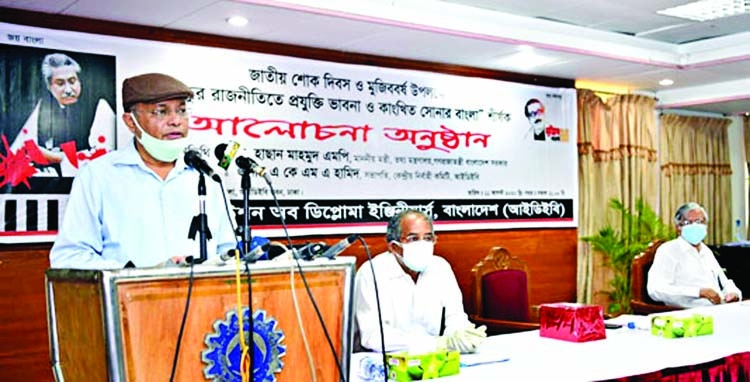 Information Minister Dr Hasan Mahmud addressing a discussion organized by Institution of Diploma Engineers' Bangladesh (IDEB) on Tuesday. -AA
Information Minister Dr Hasan Mahmud on Tuesday said the plot to assassinate Farther of the Nation Bangabandhu Sheikh Mujibur Rahman was not only to killing him but also to destroy the newly independent state of Bangladesh.
"The conspirators from home and abroad, who didn't want the independence of Bangladesh, killed Bangabandhu along with most of his family members when he was leading the country on the path of prosperity after bringing back one crore homeless people from India.
And there were another two crore refugees inside the country, the communication system was broken and the country's foreign reserve was zero," he added, reports BSS.
The minister expressed the views while addressing a discussion organized by Institution of Diploma Engineers' Bangladesh (IDEB) at its auditorium in city's Kakrail. Hasan said when Bangabandhu was assassinated in 1975, the country's GDP growth was 7.4 percent. "
Even after 40 years of his assassination, we could not exceed that growth rate. Bangladesh exceeded 7.4 percent GDP growth in fiscal 2016-17 under the leadership of Bangabandhu's daughter Sheikh Hasina," he added.
Paying rich tribute to Bangabandhu and other martyrs on the fateful night of August 15, 1975, four martyred national leaders, and the martyrs of the Liberation War, the minister said the conspirators plotted many conspiracies after killing Bangabandhu. "Even, they tried to change our national flag and national anthem and proposed to form confederation with Pakistan.
All of these were parts of killing an independent state," said Hasan, also Awami League joint general secretary.He said Bangabandhu enacted a law to rescue the oil and gas fields from foreign ownerships and bring them under the country's ownership just after three and a half years of the independence.
"We have achieved more than 1.18 lakh thousand square kilometers of sea area by the verdict of the International Court of Justice. This would have never happened if Father of the Nation Bangabandhu had not been a member of the United Nations Convention on the Law of the Sea and would not have signed the agreement," he added.
Hasan said Bangladesh is now moving ahead indomitably under the leadership of Prime Minister Sheikh Hasina to materialise the dream of Father of the Nation Bangabandhu Sheikh Mujibur Rahman.He said due to a large and well-planned relief operation led by the Prime Minister, not a single people in the country died from starvation by the grace of the Almighty. Even, the country has extended cooperation and provided aid to abroad, he added.
The minister said once a food deficient country, Bangladesh is now a food surplus one. And the country has now turned into a developed nation, he added.But, he said, BNP and other like-minded political parties are not seeing the development.The minister greeted the Hindu community on the occasion of the Janmashtami.
IDEB general secretary Md Shamsur Rahman, Diploma Engineers Service Association Parishad convener Md Fazlur Rahman, Bangabandhu Diploma Engineer Parishad general secretary AKM Abdul Motaleb and Dhaka Polytechnic Institute Teachers Association general secretary Md Saiful Islam, among others, addressed the discussion.