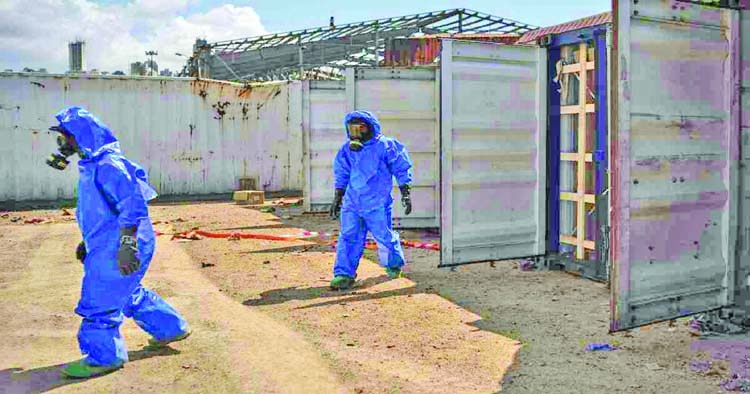 French emergency workers, part of a special unit working with chemicals, walk next to damaged containers near the site of last week's explosion, in the port of Beirut, Lebanon. -AP
At least 20 potentially dangerous chemical containers remain at the Beirut port, destroyed in a massive explosion last week, a member of a French cleanup team said.Chemical experts and firefighters are working to secure them, after finding one that was leaking.
Some of the containers were punctured in last week's blast, said Lt Anthony, a French chemical expert at the site.He said the French and Italian chemical experts working at the port have so far identified more than 20 containers carrying dangerous chemicals.
"We noted the presence of containers with the chemical danger symbol. And then noted that one of the containers was leaking," he told The Associated Press in a TV interview on Monday.
The experts are working with Lebanese firefighters to secure all of the containers and analyse their contents, he said. "We need to clean everything and put all in security." He didn't identify what chemicals were involved or provide further details.Lebanese officials have not commented on the potential chemical risks at the port. "
There are also other flammable liquids in other containers, there are also batteries, or other kind of products which could increase the risk of potential explosion," Anthony said, describing huge containers tossed around the port by the powerful force of the blast.
The explosion last Tuesday in the port killed at least 160 people and injured about 6,000 others. It is believed to have been caused by a fire that ignited a 2,750-ton stockpile of highly volatile ammonium nitrate.
The material had been stored at the port since 2013 with few safeguards despite numerous warnings of the danger. The chemical experts are among scores of French emergency workers helping search for bodies, aiding the sick and cleaning up after the blast. Nearly 50 French police are also in Beirut helping investigate what happened.
The explosion on last Tuesday sent shockwaves across the city, causing widespread damage as far as the outskirts of Beirut. Officials said they expect the death toll to rise further as emergency workers dig through the rubble to search for survivors.Beirut's city governor Marwan Abboud said up to 300,000 people have lost their homes and authorities are working on providing them with food, water and shelter.
The cause of the explosion was not immediately clear. Officials linked the blast to some 2,750 tonnes of confiscated ammonium nitrate that were being stored in a warehouse at the port for six years.The United Nations is working closely with the authorities in Lebanon to support ongoing response in the aftermath of the massive explosion, UN Deputy Spokesperson Farhan Haq told reporters. "
The World Health Organization is working closely with the Lebanese Ministry of Health to conduct an assessment of hospital facilities in Beirut, their functionality and needs for additional support, particularly amid the COVID-19 pandemic", he said.

"Specialists are being dispatched to Beirut at the moment to assist in the emergency response, both from the United Nations and multiple Member States. Experts are en route to support urban search and rescue operations. Teams are also equipped to conduct rapid assessments about the situation on the ground and help coordinate emergency response activities."