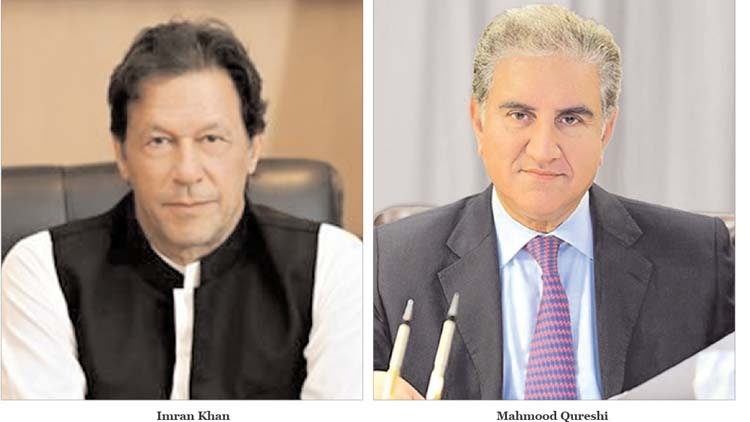 In the wake of the first anniversary (August 5th) of the new structure of Jammu and Kashmir with dismantling of the state and giving it a fresh look as a Union Territory, there were acerbic comments in Pakistan against the state of Muslims in India. Sadly, such distasteful remarks came from responsible people occupying key government positions including Prime Minister Imran Khan and Foreign Minister, Shah Mehmood Qureshi.
In an apparent attempt to communalize the date as it coincided with the foundation laying ceremony of the Hindu temple in Ayodhya, these so called responsible Pakistani leaders alleged that Muslims were maltreated in India and were hugely discriminated against. It's a different matter that by nature Indian Muslims refuse to be provoked by such fanatical statements to arouse communal passions.
Though the divisive outbursts of the Pakistani ruling politicians failed to impact the tranquil or communal amity in India, the Muslims here see through the Pakistani game plan of ceaseless attempts to cause communal friction leading to violence of disastrous proportions. Under these circumstances, they are cautious so as not to fall prey to the Pakistani laid trap of communal frenzy.
Such Pakistani charges of discrimination of Muslims in India fall flat as contrary to these baseless allegations, Muslims are striving to further gain space in various fields of activity. For example, the most recently announced results of the All India Service Examinations, conducted by the Union Public Service Commission (UPSC), the results of the Muslim candidates have been really encouraging.
This time, 42 Muslim candidates have cleared the UPSC exams compared to 28 last year. Here, it would be pertinent to point out that these exams for civil services are the most prestigious, impartial and conducted under a fool proof system.
The notable success recorded by the Muslim aspirants shows a positive trend amongst the Muslim youth to achieve something big and they are making it. The society is also accepting them without any bias thus facilitating a smooth integration. Their status within the Muslim community is also going up by several notches.
It's important to state that to help Muslims attain success in the All India Civil Services, there are a number of free coaching centers run by various institutions, scattered in different parts of India, it is important to mention their names for the good work they have been doing. The Zakat Foundation, Jamia Milia Islamia Residential Coaching Academy, Hamdard Study Circle (all functioning out of Delhi), Aaghaz Foundation.
(literary institution for Indian students, Lucknow), Larkspur Learning House of Personalized coaching centre Bangalore, Alif Academy, Career Guidance and Counseling Mumbai, Education and Career Guidance Centre Allapuzha in Kerala and Noorjahan Foundation Hyderabad. These are just a few institutes I have named here. It's evident that all corners of the country are catering to the needs of the Muslim students to fulfill their aspirations of making it to the coveted Civil Services.
Since 2016, Muslim students have been doing extraordinarily well in the All India Services conducted by the UPSC. In 2016, there was a record number of 50 candidates selected for these exams. This said, more vigorous endeavors seem necessary for the Muslims to secure positions in the top 100.
This year, there is only one. Aspirants are, however, hopeful that in the next year's examinations they would fare much better, attaining high positions in the UPSC merit list. There are clear indications that Muslim youth are now trying to be the trend setters to come into the All India mainstream and they find support for their dreams in the general populace of India. This is a healthy sign.
Significantly, there are some probable's who have had their education in Madrasas. The image of these Islamic schools of learning has often been tarnished in India as institutions which promote right wing ideology. Fortunately, it is important to note that Madrasas in India, in addition to the religious education, also impart modern education.
Their students also tend to choose a career of dignity and status rather than be drawn towards religious extremism. Imran Khan and Shah Mehmood Qureshi must take a leaf out of the book of the Indian educational institutions as to why they shun the path of violence. Such a lesson will surely help the Pakistan polity to abandon regression and assume a progressive look.
Other than the civil service, Muslims in India are also represented in the armed forces, para military units and other arms of government service which provides them self esteem and recognition. In Kashmir, there have been consistent selections of the Kashmiri Muslims in various lucrative government jobs.
Air Commodore Hilal Ahmad Rather, a proud Indian belonging to Kashmir was one of the pilots who flew the freshly acquired Rafel fighter planes from France to India. Can Pakistan cite such an example? It will be observing 73 years of its independence shortly. It's high time it takes a stock of its progress report instead of indulging in politics of division and communalism.

The writer is a security analyst, a freelance columnist on topical issues and a former National Security Advisor to the Prime Minister of Mauritius. The views expressed are personal.