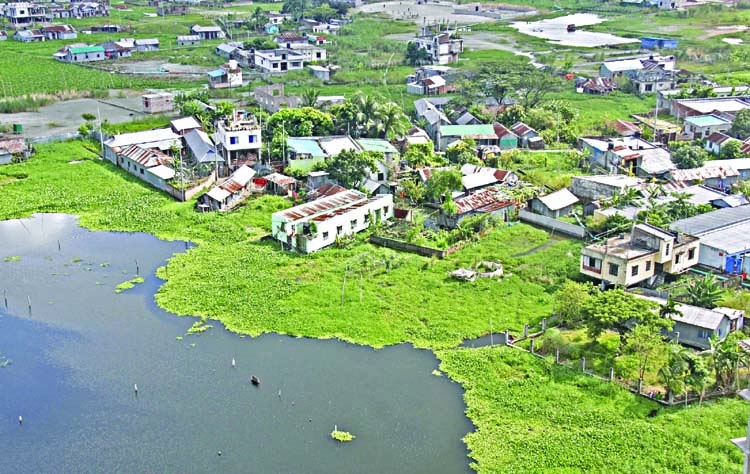 Flood situation has been improving throughout the country. However, low-lying areas in the capital still remain water-logged. The photo was taken form Nandipara of Khilgaon. -Zahidul Islam/AA
The overall flood situation continues to improve in the country's all river basins, except Brahmaputra, due to dwindling of the onrush of hilly water from the upstream.
The Brahmaputra River is in rising trend and it may continue to increase in the next 48 hours, while the Jamuna River is in falling trend and it is likely to remain steady in next 24 hours, according to a bulletin of the Flood Forecasting and Warning Centre (FFWC) issued on Tuesday morning.
The Ganges-Padma rivers are in declining trend, which may continue falling in the next 48 hours, the bulletin said, reports BSS. Except the Kushiyara, the rivers of upper Meghna basin in the north-eastern region of the country are in falling trend and may continue to decrease in the next 24 hours.
Flood situation will improve in Natore, Manikganj, Rajbari and Faridpur districts and low-lying areas adjacent Dhaka city in the next 24 hours, the bulletin added. Flood victims havestarted returning to their normal life in Rajshahi region as flood situation improved in the Ganges basin.

Of 30 river points monitored in the Ganges basin today, water levels declined at 20 points while went up at nine points and remained stable at one point.Besides, the rivers were flowing below the danger level at 28 points, while above the danger mark at one point on Tuesday morning.
A declining trend of water was recorded at all the four points of the Ganges River and at many other points of Padma River this morning, superintending engineer of Bangladesh Water Development Board (BWDB) Mukhlesur Rahman said.
The Ganges River was flowing 173 cm, 188 cm, 113 cm and 105 cm below the danger levels at Pankha, Rajshahi, Hardinge Bridge and Talbaria points respectively, while the Padma River was flowing four cm above the danger mark with a four cm fall at Goalundo point, he added.
Water levels of the Korotoa River and the Jamuna River under the Brahmaputra basin flowing through Bogura and Sirajganj were reported a falling trend at all five points of the two rivers yesterday morning.
Arifuzzaman Bhuiyan, FFWC executive engineer, said a stable situation is expected within 10 to 12 days since there is no possibility of any new flooding during the current monsoon.Of the total 101 river points monitored in the country, water levels went up at 27 stations, while decreased at 72 stations and remained stable at two points.