UN experts arrive in Mauritius to assist in oil spill 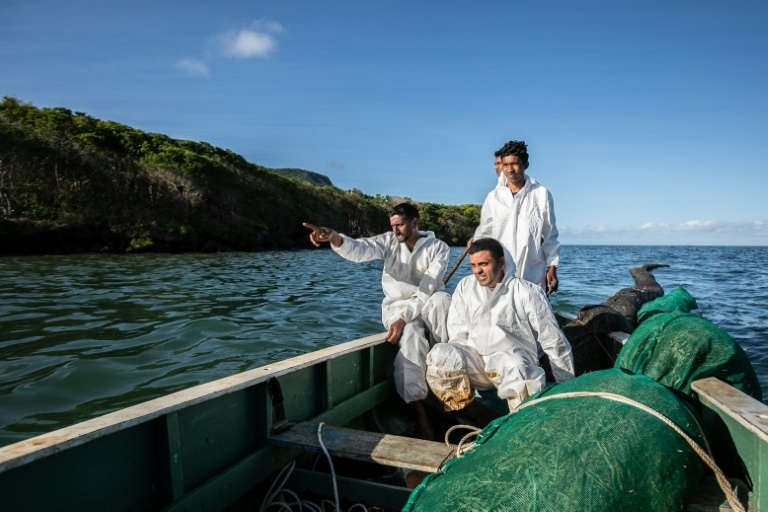 A team of United Nations experts have arrived on the island nation of Mauritius, to aid efforts to prevent an oil spill from further damaging its pristine environment.
Salvage crews were in a race against the clock as they pumped fuel from the stricken Japanese-owned bulk carrier MV Wakashio, which ran aground on a coral reef last month and began leaking oil five days ago.
Authorities have warned the boat could split in two at any moment, with cracks in the hull growing larger by day.
The inter-agency United Nations team will "support efforts to
mitigate impact of (the) oil spill on natural resources and on (the) population", read a statement from the UN office in Mauritius.
Japan has dispatched a six-member team, including members of its coastguard, to assist.
Meanwhile France has sent more than 20 tonnes of technical equipment -- including 1.3 kilometres (0.8 miles) of oil containment booms, pumping equipment and protective gear -- along with technical advisers from nearby Reunion, a French Indian Ocean island.
The Wakashio ran aground with 4,000 tonnes of fuel, and according to a statement by Mitsui OSK Lines, which operates the Wakashio, some 1,180 tonnes of fuel has leaked into the surrounding powder blue waters.
Vashist Seegobin, an ecology and conservation professor at the Mauritius University said that while the amount of fuel seeping from the boat appeared to have slowed, "it is still leaking, we must remain on alert."
The bulker struck a reef at Pointe d'Esny, an ecological jewel fringed by idyllic beaches, colourful reefs, sanctuaries for rare and endemic wildlife, and protected wetlands.
Thousands of volunteers, many smeared head-to-toe in black sludge, have turned out along the coast since Friday, stringing together miles of improvised floating barriers made of straw in a desperate attempt to hold back the sludge.
Mitsui OSK Lines said about 1,800 tonnes of fuel remained onboard the fragile vessel.
"We confirmed that the crack inside the hull of the ship had expanded. Since this ship is unable to navigate by itself, it is moored to a tugboat so that it will not drift even if it is broken," said the statement.
Legal sources, speaking on condition of anonymity as they are not authorized to speak to the press, told AFP that the Wakashio was on its way from China to Brazil.
The captain, an Indian citizen, and several crew members were interrogated by police on Tuesday as authorities seek to determine why the vessel was so close to the Mauritian shore.
"Everything depends on what the South African experts manage to get off the black box," said a source close to the investigation.
Mauritius and its 1.3 million inhabitants depend crucially on the sea for food and ecotourism, having fostered a reputation as a conservation success story and a world-class destination for nature lovers. -- AFP