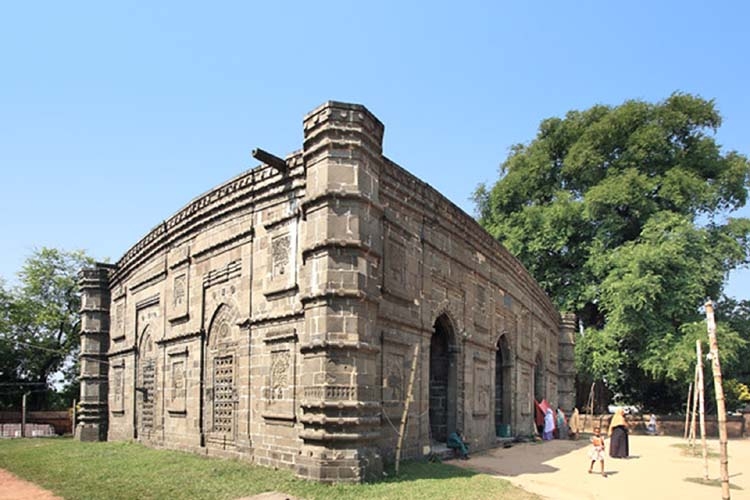 Kusumba Mosque is named after the village of Kusumba, under the Manda upazila of Naogaon district, on the west bank of the Atrai River. It is inside a walled enclosure with a monumental gateway that has standing spaces for guards.
It was built during the period of Afghan rule in Bengal under one of the last Suri rulers Ghiyasuddin Bahadur Shah, by one Suleiman who was probably a high ranking official. The inscription tablet in Arabic (only the word 'built by' is in Persian) dating the building to 966 AH (1558-59 AD) is fixed over its eastern central entrance.
Although built during Suri rule, it is not influenced at all by the earlier Suri architecture of North India, and is well grounded in the Bengal style. The brick building, gently curved cornice, and the engaged octagonal corner towers are typical features.
The mosque, presently protected by the Department of Archaeology of Bangladesh, was badly damaged during the earthquake of 1897. Although the main fabric of the building is of brick the entire exterior walls, and the interior up to the arches of the pendentives have stone facing.
The columns, platform, floor, and perforated side screens are of stone. The mosque has a rectangular plan with three bays and two aisles, three entrances on the east and two each on the north and south sides. The central mihrab is projected in the west.
The interior west (qibla) wall has two mihrabs on the floor level opposite the central and southeastern entrances, but the one in the northwestern bay is above a raised platform ascended by a staircase on the east. The presence of such a platform in a non-imperial mosque indicates that not only royalty, but nobility and high-ranking officials were also separated from the general public during prayers. The mihrabs have elaborate stone carving.
They have cusped arches crowned with kalasa (water pot) motifs, supported on intricately carved stone pillars which have projections and tasseled decorations hanging from chains. Bunches of grapes and vines curve in an almost serpentine manner on the mihrab frames, and kalasas, tendrils and rosettes are reduced to dots.
The platform edge has grape vine decoration, and there are rosettes on the spandrels of the arches supporting the platform, as well as on the mihrab wall. The stone used in the exterior facing is of a coarse quality and carved in shallow relief. Mouldings are most prominent decorative feature on the outside.
They divide the walls into upper and lower sections, run all along the curved cornice, around the corner towers, in a straight line below the cornice, and frame the rectangular panels in the east, south and north walls. The spandrels of the central entrance arch are filled with small kalasa and rosette motifs. The north and south sides have screened windows.

How to go
Buses can be used to get between major towns, or else rickshaws for small distances. There are two major Bus Stand/ Stop in Naogaon District. The First but small one is "Dhaka Bus Stand" , where usually you will get buses to go to Dhaka, Bogra, Sylhet and Chittagong mainly.
The other one is "Baludangga Bus Stand" situated almost at the end of the Naogaon Municipality. At "Baludangga" Bus Stand, you can get buses to travel to Paharpur, and other Sub-division of Naogaon District, such Sapahar, Nazipur, badalgachi etc.
The other most convenient options is the "Bangladesh Railway", from "Santahar" Railway Station. You can find numerous trains from "Santahar" to various district in Northern & Southern Bangladesh. Using First class ticket is a very convenient way for foreign Tourists, to be safe and pleasant journey, and price is also very reasonable in fact Bangladesh Railway is cheap. After reaching Naogaon you may take Bus or CNG auto rickshaw and head towards your destination.

Things to do
View the 9 chariot wheels and Dakeswari temple in the Rajbari.
Pray in the mosque.