Members of Rapid Action Battalion (RAB) on Wednesday arrested two alleged wildlife smugglers from Batiaghata upazila in Khulna along with a valuable wild lizard (gecko). The arrested are Ariful Islam alias Sagar, 42, son of Rostom Ali, hailed from Rupsha Strand Road in the city and Milon Sheikh, 34, son of Abdur Rob Sheikh, of Aruadanga village under Fakirhat Police Station of Bagerhat, said a RAB-6 press release.
On secret information, a team of RAB conducted a drive at Katianagla village under Gangarampur union in the upazila and arrested the two wildlife smugglers when they were selling a valuable gecko to a customer around 4.30pm, reports BSS. The RAB members also recovered a gecko from the smugglers while the customer managed to flee. the press release also said.
During interrogation, the duo confessed to RAB that they are the members of wild life smuggling syndicate and were involved with wildlife smuggling group for a long time.A case was lodged with Batiaghata Police Station in this connection. 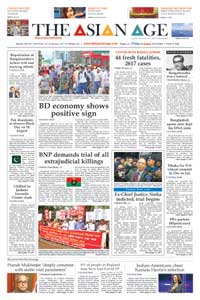