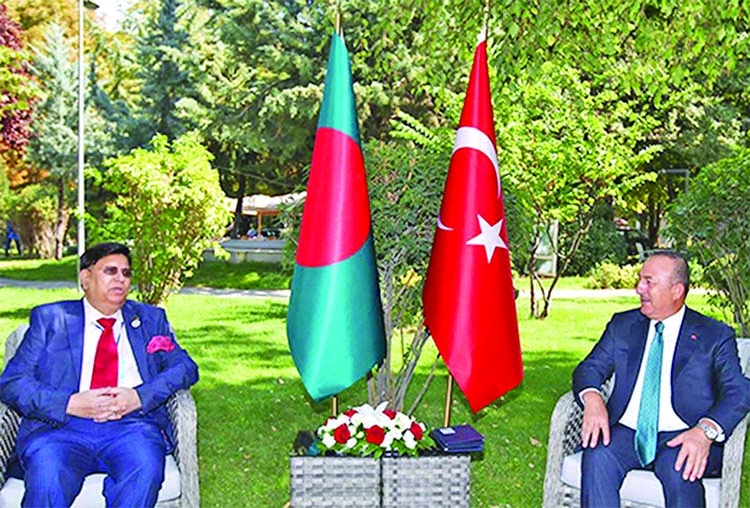 Foreign Minister Dr Abdul Momen and his Turkish counterpart Mevlut Cavusoglu on Monday. -Agency
Turkey has assured that it would increase its investment in Bangladesh as Ankara wants to open new avenues of trade cooperation with Dhaka.The assurance was given while Bangladesh foreign minister Dr Abdul Momen, who is now in Ankara, held a meeting with his Turkish counterpart Mevlut Cavusoglu on Monday, a foreign ministry press release said on Tuesday.
During the meeting, the two foreign ministers decided to hold the Foreign Office Consulta-tion (FOC) and Joint Economic Commission (JEC) meetings at the earliest.
Turkey also assured to extend all support to Bangladesh for ensuring safe and secured repatriation of forcibly displaced Rohingyas to Myanmar.Ankara had already assured Dhaka that they would raise the Rohingya repatriation issue at the next United Nations Security Council (UNSC) meeting.
Since August 25 in 2017, Bangladesh is hosting over 1.1 million forcefully displaced Rohingyas in Cox's Bazar district and most of them arrived there after a military crackdown by Myanmar, which the UN called a "textbook example of ethnic cleansing" and other rights groups dubbed as "genocide".
The two ministers discussed ways to expedite the activities of D-8 as Dhaka is set to host the D-8 summit tentatively in January and February next depending on the COVID-19 pandemic condition.Bangladesh will take over as the next chair of the D-8 through Dhaka Summit that was supposed to be held in May this year but delayed due to the pandemic.
Currently, Turkey chairs the D-8, Organization for Economic Cooperation, also known as Developing-8, that also comprised seven other countries - Bangladesh, Egypt, Nigeria, Indonesia, Iran, Malaysia and Pakistan.
The two ministers also expressed their countries' consensus in support of the cause of Palestine.The Turkish minister expressed interest to provide more ventilators and masks for Bangladesh to help in its successful combat against the COVID-19 pandemic.
Both the ministers put emphasis on further deepening bilateral relations between the two countries, including the areas of education exchange and cultural ties while Cavusoglu highly appreciated Bangladesh's recent socioeconomic development.Momen is on a four-day tour in Turkey. He joined the inaugural ceremony of Bangladesh Chancery complex in Ankara on Monday.
Prime Minister Sheikh Hasina virtually inaugurated the newly built Bangladesh chancery complex in Turkish capital Ankara from Dhaka.Dr Momen is scheduled to return home today.