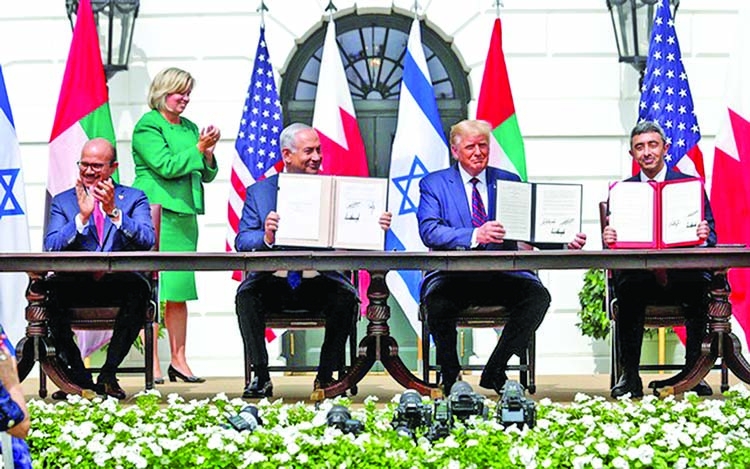 Bahrain's Foreign Minister Abdullatif Al Zayani, Israel's Prime Minister Benjamin Netanyahu, US President Donald Trump and United Arab Emirates (UAE) Foreign Minister Abdullah bin Zayed participate in the signing of the Abraham Accords, normalizing rela
The United Arab Emirates and Bahrain signed agreements on Tuesday for normalising relations with Israel, becoming the latest Arab states to break a longstanding taboo in a strategic realignment of Middle Eastern countries against Iran.
US President Donald Trump hosted the White House ceremony, capping a dramatic month when first the UAE and then Bahrain agreed to reverse decades of ill will without a resolution of Israel's decades-old dispute with the Palestinians, reports Reuters.
In front of a crowd of several hundred people on the White House lawn, Prime Minister Benjamin Netanyahu signed accords with Emirati Foreign Minister Sheikh Abdullah bin Zayed al-Nahyan and Bahrain's Foreign Minister Abdullatif Al Zayani.
The deals, denounced by the Palestinians, make them the third and fourth Arab states to take such steps to normalise ties since Israel signed peace treaties with Egypt in 1979 and Jordan in 1994.
Meeting Netanyahu earlier in the Oval Office, Trump said, "We'll have at least five or six countries coming along very quickly" to forge their own accords with Israel. But he did not name any of the nations involved in such talks.Speaking from the White House balcony, Trump said: "We're here this afternoon to change the course of history."
Flags of the United States, Israel, the UAE and Bahrain were in abundance.He called it "a major stride in which people of all faiths and backgrounds live together in peace and prosperity" and declared that the three Middle East countries "are going to work together, they are friends."
The back-to-back agreements mark an improbable diplomatic victory for Trump. He has spent his presidency forecasting deals on such intractable problems as North Korea's nuclear program only to find actual achievements elusive.Bringing Israel, the UAE and Bahrain together reflects their shared concern about Iran's rising influence in the region and development of ballistic missiles. Iran has been critical of both deals.
But in a sign that regional strife is sure to continue while the Israeli-Palestinian conflict remains unresolved, sirens warning of rocket fire from Gaza sounded in southern Israel on Tuesday as the ceremony was under way in Washington.Israel's Channel 12 TV said two people were wounded by rocket fragments at an Israeli shopping mall in Ashdod.