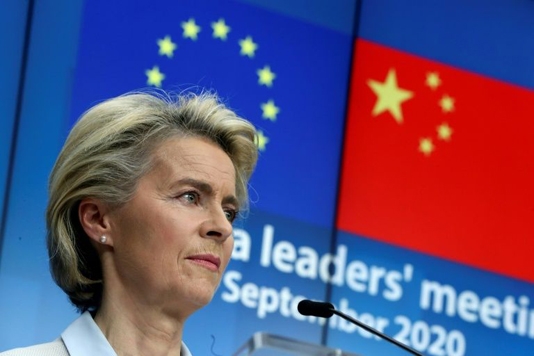 EU chief Ursula von der Leyen will champion plans to relaunch Europe’s coronavirus-devastated economy through a green new deal Wednesday, in her annual State of the European Union address.
The president of the European Commission, Brussels’ top official and a former minister in German conservative Angela Merkel’s government, will debate her programme in the European Parliament.
Because of the overlapping crises overshadowing the set-piece event, the MEPs will host von der Leyen in Brussels rather than at their Strasbourg seat, which is in a coronavirus “red zone”.
And the pandemic will be at the forefront of members’ thoughts as she promotes her “European Green Deal” and a “Europe Fit for the Digital Age” — the main themes of her presidency so far.
Environmentalists hope von der Leyen’s key announcement will include a new target to reduce Europe’s total greenhouse emissions by 55 percent by 2030 — more than the current goal of 40 percent.
Lawmakers, lobbyists, activists and envoys from EU member states will want to hear how she intends to tackle a renewed migrant crisis and pass a huge new budget and post-virus stimulus plan.
Brussels also faces crises on its borders, with Turkish drilling vessels hunting gas reserves in Greek waters, popular unrest in Belarus and the EU’s long divorce from Britain.
Von der Leyen, a 61-year old medical doctor and conservative politician, took office in December as a compromise leader for the commission, the EU’s executive branch.
– Loose front –
She is seen as both a political leader, attempting to steer a governing programme for the bloc through parliament and summits of EU leaders, and as the union’s chief administrator.
A member of Merkel’s CDU, she served as Germany’s defence minister but has never been a head of state or government and Merkel’s sponsorship and support was seen as key to her rise.
She was born in Brussels — her father was an EU official — but she had no power base in the European parliament and her appointment won the backing of 383 MEPs to 327.
Her legislative programme, in particular the post-Covid recovery plan laboriously approved by the 27 EU national leaders in June, will require broad coalition support.
So far the main pro-EU, centrist factions in parliament have backed her, but the debate will underline the challenge of keeping the loose front together.
On Wednesday MEPs will make a purely consultative vote that should allow the Commission to borrow EUR750bn on the markets for von der Leyen’s “Next Generation EU” plan.
This, for the first time creates, a pool of common debt — shared between EU members, to lower borrowing costs for weaker members — a move that was long opposed by “frugal” northern states.
The vote paves the way for the ratification process in all 27 EU countries. Each member state has its own constitutional process to approve the budget, but they must be unanimous.
At the same time, MEPs are due to vote on the “Multiannual Financial Framework” 2021-2027 and have threatened to veto it if it does not meet their criteria for respect of the rule of law.
MEPs have said they will not pass a budget that would allow member states like authoritarian Viktor Orban’s Hungary to receive funds while flouting Europe’s laws and values.
But Orban or another leader could veto the budget, and member states are not keen to see the normally accommodating MEPs find their voice — and their principles — in a moment of crisis.
Several political groups will also push for Brussels to get more “own resources” — means of raising its own funds, such as by a tax on plastic, rather than relying on national contributions.
“If the parliament does not approve the MFF, everything falls apart. The recovery plan is at risk, since there’s no recovery without the MFF,” a senior european diplomat told AFP.
“Parts of the stimulus have been taken hostage by elected officials,” he warned. “Ask European citizens whether they want a recovery plan, or an increase in powers for MEPs.”