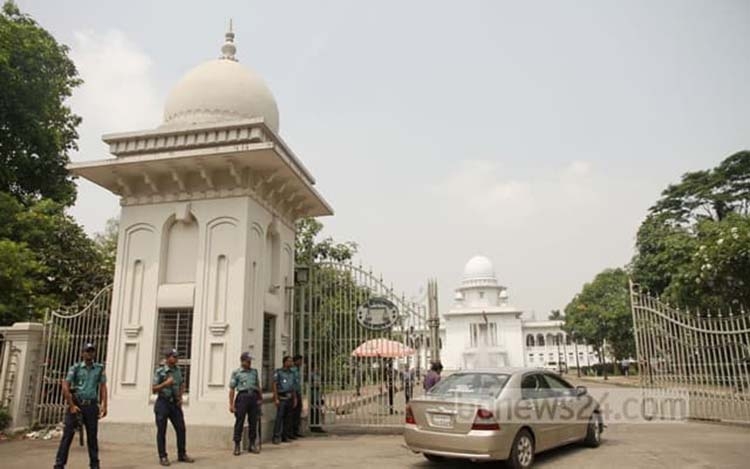 The practice of collecting personal data of subscribers, such as records of calls and conversations, by the law enforcement from phone companies without formal seizure and the users’ knowledge must be stopped, the High Court has observed.
The panel of Justice Md Shawkat Hossain, Justice Md Ruhul Quddus and Justice ASM Abdul Mobin made the observation in a verdict on the abduction and killing of “Saikat”, a 7-year-old boy, in Netrakona 10 years ago.  In a summary verdict on Aug 28, 2019, the High Court acquitted the accused, “Oli”, who had been sentenced to death by a trial court.  The High Court published the full verdict with the observation on Sunday, elaborating on the reason behind its not accepting the call list provided by the investigation officer as evidence.
The judges also said the Bangladesh Telecommunication Regulatory Commission and the phone companies operating in Bangladesh have a “great responsibility” towards proper compliance of the constitutional mandate of respecting privacy in communication.  “They cannot provide any information relating to communication of their subscribers and the citizens of the Country, unless it is permissible in law matched with the Constitution,” they added.  “Call list of a cellular phone company is no doubt an electronic document of private nature.
Our Evidence Act has not been amended to deal with the electronic record/document and as such the existing provisions of the Act are followed to deal with such document,” the court observed.  “Mere production of the documents purporting to have been written, printed, signed or generated from an electronic record by a third person is no evidence of its authorship. It is necessary to prove their genuineness, execution and generation,” it added.
The verdict noted that mere production of a document and marking it as an exhibit cannot be the proof of its contents because the contents of every document have to be proved following the Act that requires proof of both the contents, hand writing or typing and signature on it.  For the purpose of proving the contents of any electronic record, any procedure for its certification has not yet been introduced, the judges noted.
In order to prove an electronic record or signature under the existing law of evidence, it is necessary to stamp its printed version with seal of the company or office and sign it, they pointed out.  When it is adduced in evidence in a proceeding of court, either the person who generates or signs it or in his absence, any other person who is acquainted with the record and signature must come before the court to prove the contents and his signature thereon.
In the case against Oli, the call lists do not bear any seal of the private phone company or signature of the person who generated it, the judges continued.  “Any call list/information of a private phone company printed on a plain paper without any seal or signature of the person who generated it, production of such document in court by a third party and making it exhibit do not have the value of legal evidence,” the verdict said.  “
No correspondence through which the Investigating Officer officially collected the lists has been produced. In fact it is not clear how the Investigating Officer collected the lists.  “In this regard it may not be out of place to point out that the practice of collection of call list/audio discussion from public/private phone companies without any formal requisition and formal seizure, and also behind the knowledge of the subscriber must be stopped,” the court added.
The judges also said in the verdict private communications between citizens including their audios or videos being leaked and published on social media for different purposes is “a common experience” nowadays.  “We must not forget that the citizens’ right to privacy in correspondence and other means of communication is guaranteed under article 44 of the Constitution which cannot be easily violated at the instance of any interested quarter,” they said.
When the investigating officers in relation to particular investigation require any call lists or information relating the one’s communication, they must make a formal request to the concerned authority of the respective company stating his reason why it is necessary for that investigation, “not in a roving and fishing manner”, the High Court said.  Only in that case the phone companies have obligation to supply the call list or information within the knowledge of the subscriber.
Otherwise the supplied documents would lose its evidentiary value and the supplying person or authority would also be liable for aiding violation of one’s fundamental right guaranteed under the constitution, the court warned.  Bangladesh’s Evidence Act should also be made up-to-date by way of amendment or new legislation to deal with the developed technology as well as electronic record or document, the court said, citing “unimaginable development” of information and communication technology and its use in commission of various offences.