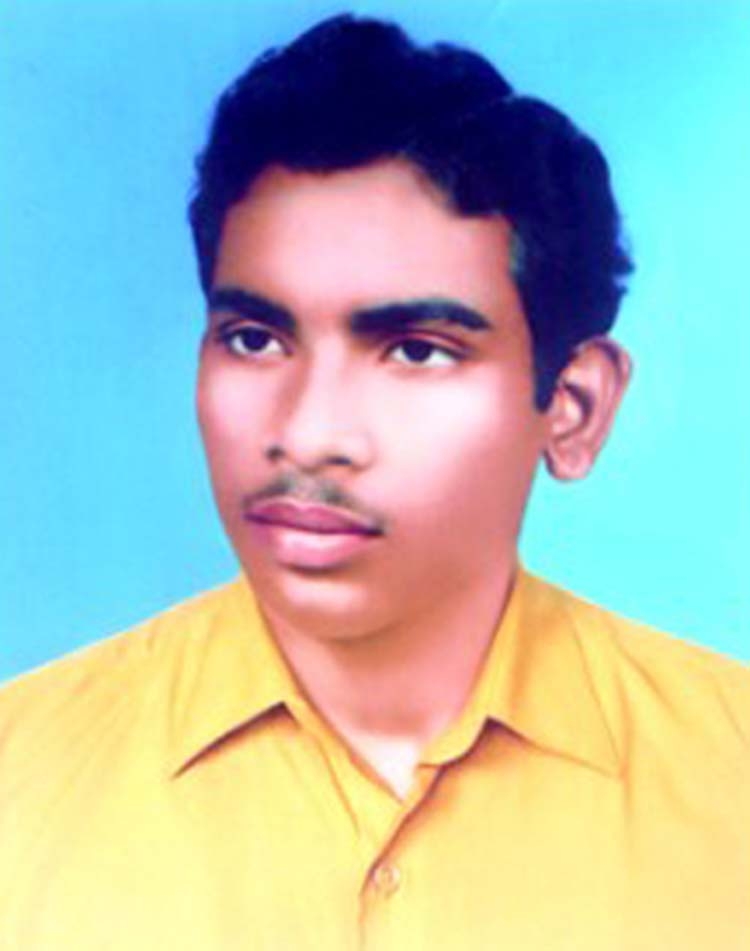 Bir-Uttam Khwaja Nizamuddin
Nearly it is 49 years that have passed by after the Liberation War of Bangladesh. Events after events ran down the lane of history. The '71-events the massacre, the intolerable trauma still makes me sick even today and seems to continue pricking till I cease to exist. In 1971, I was but a student of class ten in Cumilla Zilla School. Rumors spread, on the evening of March 25; the Pakistani Army may mobilize that night. Not far away was situated the Moinamoti Cantonment. And therefore, we took a position at Jhawtala, currently known as Shaheed Khaja Nizamuddin Bir Uttom Sarak, to barricade their way in. We collected used tires from auto-garages and heavy wood trunks.
From Cumilla Railway Station, an empty wagon was brought in and huddled at Shasongacha rail crossing. Somewhere nearby, possibly from inside Police Lines, came sounds of continuous firing after midnight. In the morning, adjacent to the Temple of Kali in Kandirpar, we found Ratan Vadra, his brother and children lying dead. Another 7/8 dead bodies were there in the Pubali Bank Branch area. Our national flag with the map of Bangladesh was still fluttering on a war-ravaged one-storeyed yellow building, the residence of Ustad Ayet Ali Khan.
In his March 7, 1971, historic speech, Father of the Nation, Bangabandhu Sheikh Mujibur Rahman, clearly declared, "... from this day Bangladesh's courts, magistrates, government offices and educational institutions will be shut down indefinitely." [from Fakrul Alam's translation of the speech.] My father, late Abdul Latif Bhuiyan, responded to the call of Bangabandhu Sheikh Mujibur Rahman and managed to reach our house KARABI at Bagichagaon in Cumilla. Two days it took to be home-- now on foot, now on a rickshaw and other vehicles, whatever he could manage to get by. As a government employee, my father had been the Sub-divisional Manager at Acquired Estates under the Ministry of Revenue. He was then posted in Kishoreganj, a sub-division of the then greater Mymensing district.
Shaheed Khawja Nizamuddin Bhuiyan Bir Uttom, my second eldest brother, did his B.Com (Hons) in 1969 and M.Com in Management in 1970 while in the same year got admitted at IBA-run evening MBA in the University of Dhaka. While studying as a resident student of Mohsin Hall, he witnessed the Kaal Ratri of March 25, 1971Ñ the Army convoy, bombshells, rifle shots, mass killing, fire and the corpses of innocent people. He escaped the armed forces, left the hall, left the city of midnight massacre and managed to get home in Cumilla. The journey to Cumilla from Dhaka was a difficult one of 4-days' on foot and other odd vehicles. It was the first week of April.
Nizam vai predicted the setting in a lingering period of fights and struggles and told father not to go back to Kishoreganj. Not even that house of ours seemed safe. And he suggested that we go to our village home in Malapara. The same day my brother, Bir Uttom Shaheed Nizamuddin Bhuiyan, left home. And he left forever. In mid-April, my father, mother, three sisters and two teenaged younger brothers were shifted to Malapara village in Brahmanpara as a safer place to live through the period of uncertainty. We walked past Banasua Bridge and then took a rickshaw to get to Malapara. My brother decided to fight the evil, got training in Agartala, joined Sector 4 and started his fight against the Pakistan Occupation Force. The late Major General (retd.) C. R. Dutta was the Commander of Sector 4 and Khawja Nizamuddin was Second-in-Command of the Jalalpur Sub-sector.
I decided to join forces against the Pakistan Occupation Army. Towards the end of April, I reached Hatimara camp via Rajapur. Initially, I was assigned to get messages in the town from the then MCA Professor Khorshed Alam and vice versa. I rode back and forth on a bicycle over the bridge at Palpara. The job was not that tough but had been risky. One Shahnewaz of Thakurpara in Cumilla town lost his life at the Pakistani Army's hand while carrying out this job. To get a wider opportunity then leaving my job, I went to Agartala and moved off to Kolkata ultimately. In Kolkata, I paid visits to party offices of NAP, Communist Party and the leftist Students Union to take part in activities related to our liberation movement.
Once Bangladesh earned freedom from an enemy force, we started getting back to Bangladesh. My parents and siblings got back home. But sadly, my second eldest brother Shaheed Khawja Nizamuddin Bhuiyan Bir Uttom, did not come back home. Reaching our home, 'KARABI' at Bagichagaon in Cumilla on January 10, 1972, I realized what had happened. At the beginning of September, he achieved martyrdom in a front-line fight against the Pakistan army at Mamtajgonj in Kanaighat. Both my father and mother fell sick at the news and my father never again joined back at his job. My brother was buried along with three Muslim saints side by side at Mokamtila in Kanaighat, Sylhet.
Later Salamitila, Momotajgonj, Noktipara, Monipur, Voramahid and a part of Kanaighat in Sylhet were combinedly named Nizamnagar in memory of Khawja Nizamuddin. Besides, in Cumilla, the road between the intersection near Police Lines and Kandirpar was named Shaheed Khawja Nizamuddin Bir Uttom Sarak to immortalize this son of the soil of Cumilla. In the capital city, the highway from Malibag intersection to Khilgaon is officially named Bir Uttom Shaheed Khawja Nizamuddin Sarak. To commemorate this valiant student of the University of Dhaka, there stands the Shaheed Nizamuddin Bhuiyan Bir Uttom Smriti Folok in front of the Arts Faculty. The Hotel Intercontinental authority has set a smriti folok in the front in respect to the memory of their courageous employee.
All our relatives, friends & well-wishers, please keep my brother in your prayers and make duah for him to Allah subhanuta'la. 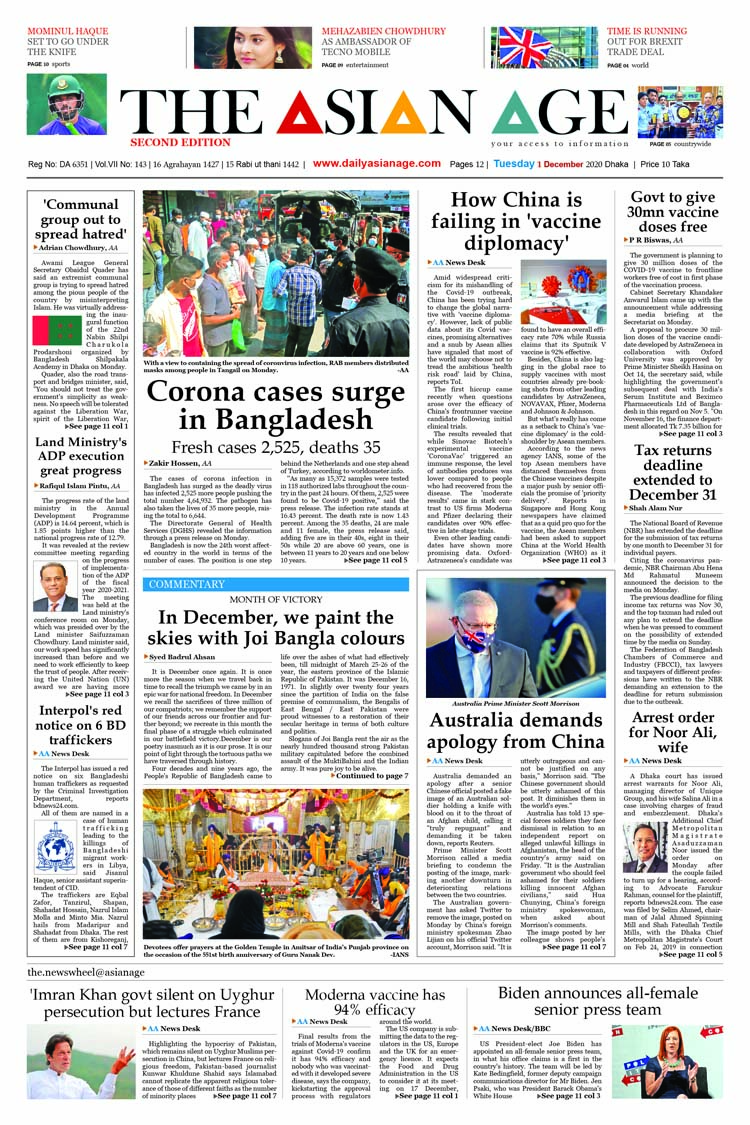