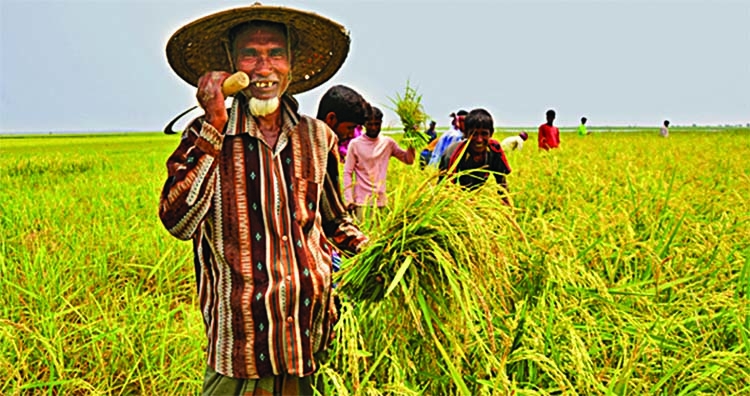 Bangladesh is a food-surplus country. It has been making efforts to ensure a sustainable food security for all. -CRI
Bangladesh has gained 13 places to rank 75th out of 107 qualifying countries on the latest Global Hunger Index, well ahead of neighbouring India.While the South Asian nation has made significant strides in its battle to eradicate hunger, it stands among 40 countries where hunger remains at 'serious' levels with a score of 20.4, down from 25.8 last year, according to the 2020 report.
A high GHI score can be evidence of a lack of food, a poor-quality diet, inadequate child care-giving practices, an unhealthy environment, or all of these factors. The GHI ranks countries on a 100-point scale, with 0 being the best score (which means no hunger) and 100 the worst, reports bdnews24.com.
Jointly published by Concern Worldwide and its partner Welthungerhilfe, the 2020 Global Hunger Index was launched through an online event on Friday.
The report categorises countries into moderate, serious, or alarming hunger level, using the most recently published official data from a range of specific sources including FAO, UNICEF and WHO.  As a result, the impact of the current COVID-19 pandemic is not reflected in the Index.
The world faces an "immense mountain" if it is to achieve the United Nations Sustainable Development goal of 'Zero Hunger' by 2030, according to the report.GHI scores show that hunger and undernutrition have worsened in the countries with hunger level. In many countries, the situation is progressing too slowly or even worsening, the report states.

GHI scores are based on the values of four component indicators: undernourishment (share of the population with insufficient caloric intake), child wasting (share of children under-five who have low weight for their height, reflecting acute undernutrition), child stunting (share of children under-five who have low height for their age, reflecting chronic undernutrition), and child mortality.According to the index, Bangladesh has made significant inroads in curbing child stunting, with the rate dropping by 12.8 percentage points between 2012 and 2020.
But undernourishment remains an issue, with 13 percent of the population suffering from nutritional deficiencies. It marks a marginal improvement on the rate of 13.8 percent in 2012. Meanwhile, the under-five mortality rate in the country is 3 percent in 2020, down from 4.3 percent in 2012.
"In Bangladesh, we are now looking at a possible doubling of the country's poverty rate this year for the COVID-19 pandemic. Furthermore, Bangladesh is highly vulnerable to a worsening of food and nutrition insecurity caused by the overlapping Health, Economic, and Environmental crises of 2020" said Hasina Rahman, Assistant Country Director, Concern Worldwide."At this crucial moment, we must act together to reshape our food systems as fair, healthy, and environmentally friendly in order to address the current crises, prevent other health and food crises from occurring, and chart a path to Zero Hunger by 2030." she added.
Sri Lanka (64th) and Nepal (73rd) are the only countries in the region to fare better than Bangladesh on the index, both with 'moderate' levels of hunger. Meanwhile, India (94th) is lagging behind Pakistan (88th) in the rankings with Afghanistan (99th) the only other country to feature in the index.The official data used in calculating the 2020 rankings does not yet reflect the damaging impact which COVID-19 has had on countries.  That said, it clearly points to where underlying vulnerabilities to food insecurity already exist.
"Even before COVID-19, the world was already off track to achieve Zero Hunger by 2030. That negative trajectory has been forcefully exacerbated by the events of this year and the economic downturn is affecting every corner of the world," Concern Worldwide Chief Executive Dominic MacSorley said.
"The phenomenal impact of these multiple crises - combined with the ongoing effects of climate change and conflict - is rapidly escalating food and nutrition insecurity for millions, especially for those who were already most vulnerable. COVID-19 has exposed the woeful inadequacies of the world's food system and its inability to deal with overlapping global and regional crises."Experts argue that only by taking both an integrated and holistic approach to global and environmental health will it be possible to achieve Zero Hunger by 2030.