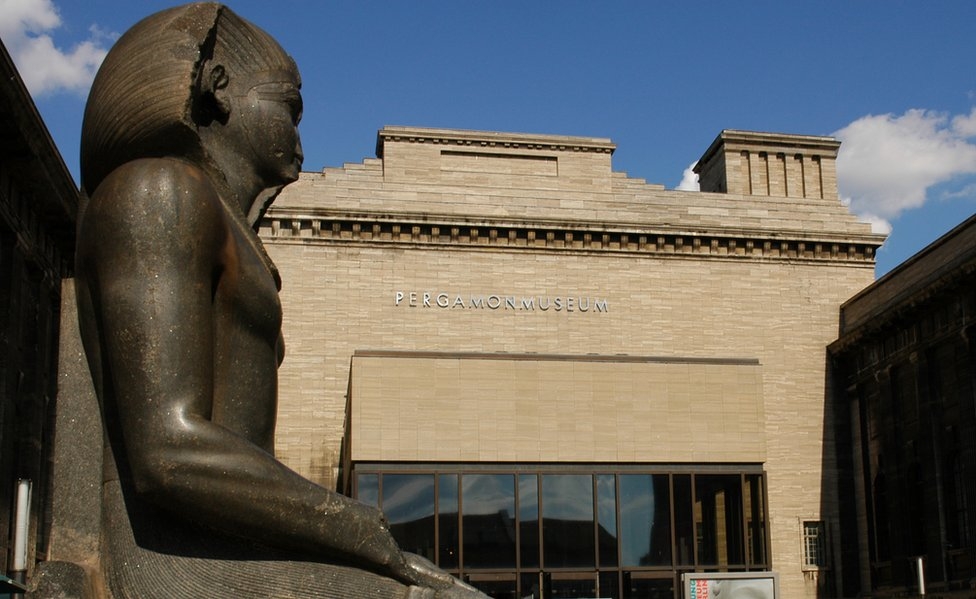 It is being described as one of the biggest attacks on art and antiquities in post-war German history, but it has taken more than two weeks to emerge.
At least 70 artefacts were sprayed with an oily liquid on Berlin's Museum Island, a Unesco world heritage site that is home to five famous museums.
The attack took place on 3 October, the anniversary of German reunification.
German reports have speculated whether supporters of a far-right conspiracy theorist may have been involved.
Attila Hindmann, who has spread conspiracy theories about the Covid-19 pandemic, has also claimed that one of the five museums, the Pergamon Museum, is home to the "Throne of Satan".
What we know
Berlin's state criminal police agency released details of the attack late on Tuesday, 17 days after at least one unknown attacker targeted Ancient Egyptian sarcophagi, stone sculptures and 19th Century paintings.
The reason for the initial secrecy is unclear, and the story was only confirmed after police were approached by Die Zeit magazine and Deutschlandfunk radio. Other museums were not informed of the possible risk either, they report.
Investigators have emailed people who bought museum tickets on the day of the attack appealing for information.
Police told Der Tagesspiegel website they had been investigating the attack for a while "but for strategic reasons we've not made the case public".
The oily liquid sprayed on to the dozens of artefacts has caused damage and left visible stains.
The museums targeted include the Pergamon Museum, which is home to the renowned Pergamon Altar, erected by King Eumenes II in the Second Century BC. Pergamon was an Ancient Greek city in Asia Minor, or modern-day Turkey.
Artefacts were also attacked in the Neues Museum, Alte Nationalgalerie and elsewhere.