Saudis shun 'made in Turkey' as rivalry deepens 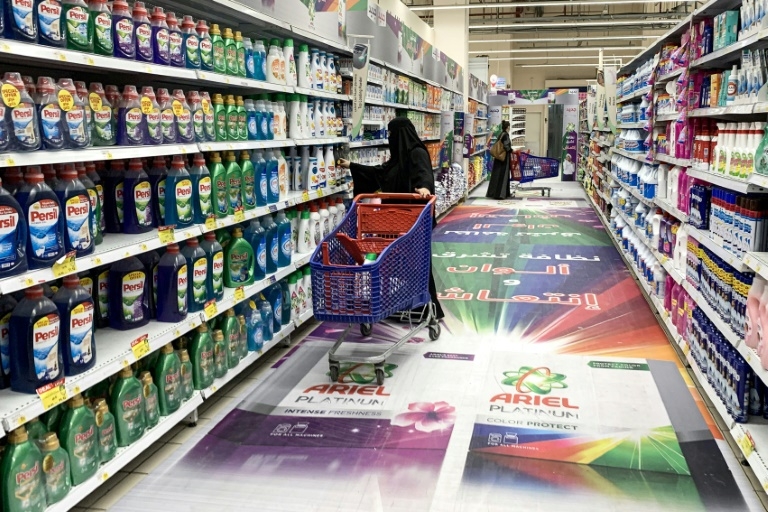 From pickled vine leaves to coffee and cheese, Saudi supermarkets are taking Turkish products off the shelves after calls for a boycott, as rivalry between Riyadh and Ankara heats up.
The two countries have long competed for supremacy in the Muslim world, but their geopolitical rivalry intensified after Saudi agents murdered journalist Jamal Khashoggi at the kingdom's Istanbul consulate in 2018.
The wealthy Gulf petro-state has sought to pressure Turkey's already struggling economy, with high-rolling Saudi tourists facing calls from nationalists last year to boycott the tourism magnet and stop purchasing property there.
Now, Turkish exporters of textiles and other goods are complaining of inordinate delays at Saudi customs, and warning that Riyadh's attempts to block the imports could disrupt global supply chains.
This week, after an earlier call from the head of the Saudi chamber of commerce to "boycott everything Turkish", multiple supermarket chains announced they were stopping the import and sale of Turkish products.
"This decision has come in solidarity with the popular boycott campaign," one of them, Abdullah AlOthaim Markets, said on Twitter.
Some retail chains said they would continue selling the goods until current stocks were exhausted.
But at one Riyadh supermarket, an AFP correspondent saw salesmen scrambling to clear entire shelves of products made in Turkey, such as coffee, chocolates and jars of pickled vegetables.
Egyptian-made feta sat on a refrigerated shelf marked for Turkish cheese.
"This is a very sensitive matter," the country manager of the retail chain told AFP, requesting anonymity and declining to discuss the fate of the removed products.
While the exact trigger for the new boycott remains unclear, the campaign targets Turkey's coronavirus-hit economy as it grapples with a currency in free fall.
The two countries are at loggerheads over a range of regional issues, from Libya and Syria to Qatar, a key Turkish ally that faces a three-year Saudi-led economic blockade.
Wary of rattling foreign investors and amid suspicion that Turkey could lodge a complaint with the World Trade Organization, the Saudi government has sought to distance itself from the boycott.
Authorities have denied placing restrictions on Turkish products and maintain that citizens have led the campaign.
But a joint statement from eight leading Turkish business groups this month claimed that many Saudi companies had been "forced to sign a letter of commitment not to import goods from Turkey."
The Ankara-based Turkish Contractors Association meanwhile cited "various obstacles" at ongoing Saudi projects, such as not being invited to tenders, difficulty in obtaining visas for Turkish personnel and payment delays.
"It is estimated that the negative perception of Turkey resulted in business (losses) worth US$3 billion in the Middle East for our contractors last year," the association said.
"Saudi Arabia, which was in second place in a list of countries with the most business in 2016-2018, has fallen to the lower tiers."
Meanwhile on social media, accounts belonging to Saudi nationalists have been whipping up a frenzy.
In one cartoon that circulated widely on Twitter, a hand wrapped in the Saudi flag is pictured twisting the ears of Turkish President Recep Tayyip Erdogan – a gesture seen culturally as a punishment for children.
"Stop buying Turkish products. (Erdogan) is fighting our country with our money," read one demand in Arabic on a popular messaging app.
"It's a kind of political showmanship," said Karen Young, a resident scholar at the American Enterprise Institute, referring to the campaign.
"It's a tactic for Saudi domestic consumption, a signal by the state to citizens on how to perceive and construct an external adversary."
Observers say Ankara is unlikely to cave in to the pressure.
Saudi Arabia is only Turkey's 15th biggest export market, with textiles, chemicals, furniture and steel among the main items purchased.
But Saudi nationalists have warned the boycott could spread to the kingdom's regional allies.
Observers have drawn parallels with how Saudi Arabia has flexed its financial muscle in diplomatic disputes with Canada, Germany and in particular Qatar, which hosts a Turkish military base, much to Riyadh's annoyance.
In June, the WTO rapped Riyadh for failing to protect the intellectual property rights of a Qatari-owned broadcaster by not cracking down on a bootlegging network.
"Saudi-Turkish bilateral trade flows are not significant enough to make or break the economies of either country," said Robert Mogielnicki, a resident scholar at the Arab Gulf States Institute in Washington.
"Turkey stands to lose more in the short term from disruptions to bilateral trade relations," he added.
"However, Saudi Arabia must tread carefully to minimise any reputation-related costs associated with global perceptions of its trade policy."--AFP