HC directive yet to implement 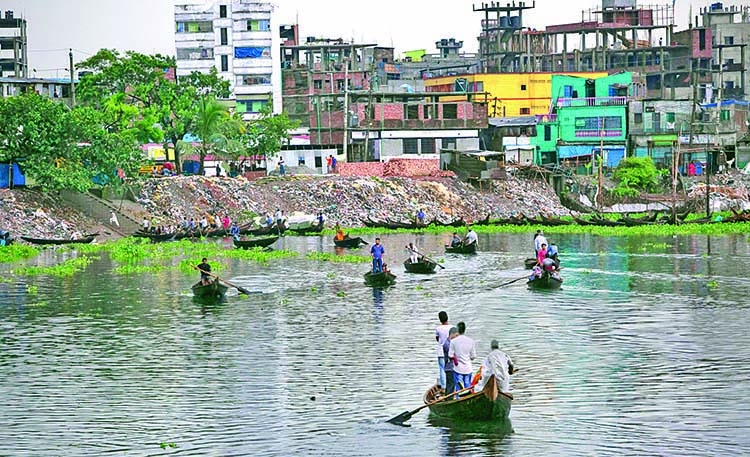 Bangladesh has been reportedly ranked 10th out of the top 20 plastic polluters in the world with the Buriganga river known as one of the most polluted rivers in the country due to rampant dumping of industrial and human waste. -Getty
Though tanneries have been shifted to Savar from Dhaka's Hazaribagh, the rivers Buriganga and Dhaleshwari are still not free from the curse of pollution and grabbing. A directive issued by the High Court to keep the flow of the rivers smooth and uninterrupted has yet been implemented.The HC directive over tannery shifting has fully not completed due to lack of proper monitoring by the authorities concerned, said environmentalists.
The pollution goes on destroying the ecological balance resulting in an adverse impact on the life of city dwellers. The residents, living surrounding the rivers, are not getting benefits, even after removal of tannery industries from Hazaribagh area due to continuous pollution from unplanned dumping of industrial and residential wastes of both city corporations.
Syeda Rizwana Hasan, chief executive of Bangladesh Environmental Lawyers Association (BELA) said, "Shifting tanneries from Hazaribagh to a safer distance was a long cherished demand of city dwellers to get rid of pollution. Though, the tanneries have been shifted to Savar after various movements for over three decades, city dwellers didn't get remedy as pollution and grabbing are still going on unabated."
"The central solid waste management system for leather processing has not yet been run completely in the Savar tannery industry. Roads and other infrastructures have not developed in that newly established industrial zone so far. Consequently, the wastes from tanneries are mixing with river water causing pollution," she added.
The water of Dhaleshwari and Buriganga is still black and toxic, as the court's directives did not implement completely, locals complained. Amit Talukder, a lawyer, said, "The High Court issued order for relocation of tannery industry to Savar from Dhaka's Hazaribagh in 2001, also 19 years ago. But, both the government and the tannery owners took long time to implement the order."
BSCIC launched the tannery industrial estate at Hemayetpur of Savar in 2018.There are huge piles of rubbish at places in the leather industrial zone built on 200 acres of land under supervision of BSCIC. Due to huge mismanagement and irregularities of BSCIC authorities, wastes from 155 tanneries of the industrial city are still going to the river. Some 133 leather industries have already gone on production.
There is a Central Environmental Treatment Plant (CETP) in the Zone, the waste is not being treated there properly. The contaminated water of CETP is still reaching to the Dhaleshwari and other water-bodies including Buriganga river after mixing with flood or rainwater during the monsoon. Seeking anonymity, an engineer involved with the project said, "The newly established tannery industry in Hemayetpur of Savar is now at a dire state due to lack of proper monitoring."
He further said, "There was a small hole of 50 square feet for dumping of tannery wastes. Now, it has turned into a larger size due to lack of maintenance. Besides, the dumping yard was set up illegally without any proper plan. There was no existence of the dumping yard in the main design. However, it was built and solid waste is still being dumped there putting the whole water-bodies including Dhaleswhari and Buriganga at risk."
"The yard was closed for around four months in impact of corona. But, it was re-launched ahead of Eid-ul-Azha last.  The state of CETP is the same. All modules are running. But, the waste is not being treated completely. These wastes are going to Dhaleshwari and other water-bodies with the rain water," he added. Denying the allegations, Engineer Jitendranath Pal, Director of the ongoing project, said, "The wastes are not kept in the dumping yard for long. The pollution of Dhaleshwari and other water-bodies has reduced."
"Over 150 leather processing factories have been shifted to Savar so far. Of them, some 115 industries carry rawhide processing activities at the preliminary stage. But, workers don't use the necessary nets to stop wastes from spreading out. Consequently, the wastes are increasing day by day," he added.
The salt separation machines used in leather processing have not installed as per necessity. Although, four CETPs are now on operation, relevant modules have no capacity to treat more than 25,000 cubic meters of liquid waste, he claimed.Shahin Ahmed, a leader of Bangladesh Tanners Association said, "Poor drainage system built with pipes with low diameter is the main barrier to removing wastes. Wastes mixed with water pollute Dhaleshwari and other neighboring rivers causing destruction of the biodiversity."
Advocate Manzil Morshed, Chairman of Human Rights and Peace for Bangladesh, said, "The government and tannery owners neglected to execute the HC directives. The benefits of preventing environmental pollution from the leather industry have not achieved. Though the pollution of Buriganga has decreased a little bit, the Dhaleshwari gets anew. If the High Court order is not effective in a proper manner, the pollution will not reduce." Besides, the government should continue drives against the illegal grabbers to protect the rivers, experts opined.