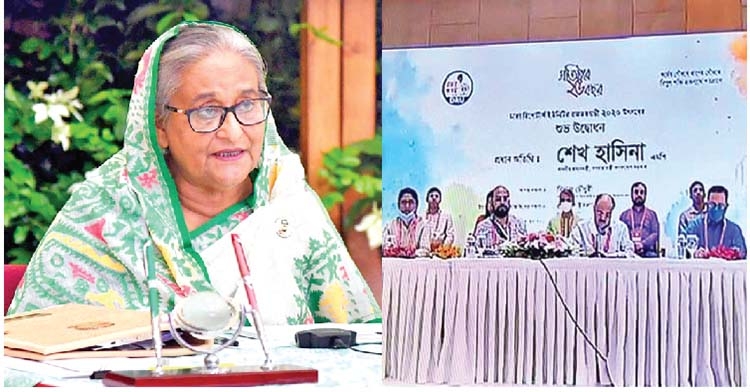 Prime Minister Sheikh Hasina virtually addresses the inaugural function of the silver jubilee program of Dhaka Reporters Unity (DRU) at the Hotel Inter Continental from her official residence Ganabhaban on Sunday. -Agency
Prime Minister Sheikh Hasina has called upon the media to check unethical journalism and not to make reports which could mislead the nation.She made the call while inaugurating the silver jubilee program of the Dhaka Reporters Unity (DRU) at the Hotel Inter Continental from her official residence Ganabhaban on Sunday.
Sheikh Hasina said, "Don't write any report that can misguide the people towards wrong directions. I call upon you all to pay heed in this regard." She lauded journalists for their objective reports and greeted constructive criticism that helped the government take quick steps against irregularities and injustice. "Going through reports in newspapers, we stand by helpless people and take tougher measures against wrongdoers," the premier said.
The head of the government called upon journalists to work with responsibility, patriotism and for the betterment of people. Quoting Father of the Nation Bangabandhu Sheikh Mujibur Rahman as saying, "Politics without principle can't give anything to the country and the nation,'' Sheikh Hasina said like that, journalism without principle cannot bring any welfare for the country rather it affects the society in many cases.
"Bangabandhu worked as a journalist in weekly Millat and Ittehad before independence and in Ittefaq after the country was liberated. He also published a newspaper named Natun Din for the Awami League. He also worked in Banglar Bani. As a daughter of Bangabandhu Sheikh Mujibur Rahman, I can claim myself as a member from a journalist family," Hasina further said.
The premier reiterated that her government firmly believes in the freedom of press and has done whatever necessary to this end. She termed newspapers the mirror of society and said, "We want journalism to be realistic and it will reflect the welfare of the country and the nation." The mentioned that her government has been arranging training for the journalists at the grassroots by founding a training institute mainly to enhance the quality of journalism to cope with the world standard. As many as 30,048 journalists were trained in the past 12 years by her government.
The head of the government went on to add that they had constituted Bangladesh Journalist Welfare Trust through which Taka 17.87 crore were distributed among 5,266 journalists while Tk 3.50 crore was distributed from the PM's Welfare and Relief Fund.She said, her government has introduced media related laws for the welfare of journalists, adding that her government amended the penal code mainly to stop wholesale arrest of the journalists.
Reiterating her government's zero tolerance policy against corruption, militancy and terrorism, she said "When any news appears regarding corruption and injustice, we never think of hiding those rather to go actions. We do not even think that the party and the government will face criticism due to the measures taken against the misdeeds."Former DRU president and chairman of the Silver Jubilee Celebration Committee Shahjahan Sarder presided over the function.