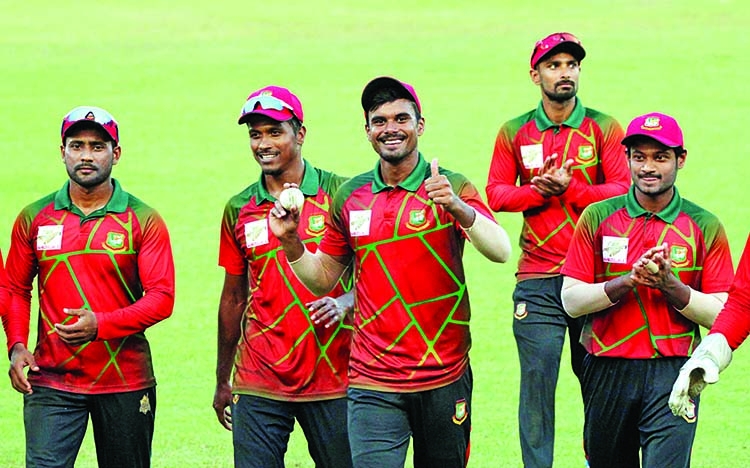 Mahmudullah XI's pacer Sumon Khan celebrates his 5-wicket haul against Nazmul XI in the final of the BCB President's Cup at the Sher-e-Bangla National Cricket Stadium on Sunday. -BCB
Sumon Khan claimed a five-for, by showing a gem of fast bowling as his side Mahmudullah XI shot Nazmul XI out for 173 in 47.1 overs in the final of the BCB President's Cup at the Sher-e-Bangla National Cricket Stadium on Sunday.Sumon Khan's 5-38 was complemented by his new ball bowling partner Rubel Hossain's 2-27 as the duo strangled Nazmul XI in a pitch that was at least conducive to batting.
Ebadot Hossain, captain Mahmudullah Riyad and Mehidy Miraz scalped one wicket apiece to add further agony for the Nazmul XI who was sent to bat first.Irfan Shukkur however stood tall in batting amid his colleagues' offensive downfall, by hitting a scintillating 75 off 77 that included eight fours and two sixes. Shukkur's batting showed the pitch had no demons at least. But Nazmul XI lost the half of the batting line even before crossing 70 runs in the most important game.
Nazmul XI's opener Saif Hasan started with boundary but Rubel Hossain took the sweet revenge by dismissing him in the penultimate delivery of the first over. His opening partner Soumya Sakar edged one to wicket-keeper of Sumon Khan bowling to be out on 5.Skipper Nazmul Hossain held the one end but the likes of Mushfiqur Rahim and (12) Afif Hossain (0), the two mainstay of middle order failed to make it big this time around. After the dismissal of the duo, Shanto also played a rash shot to be out for 32, leaving Nazmul XI to 64-5.
Irfan Shukkur found support in Towhid Ridoy when Nazmul XI was in danger to be all out below 100. They shared a 70-run partnership for the sixth wicket stand to help the side propel past 150 runs mark.After scoring 26 off 53 with two fours, Ridoy was deceived by Mahmudullah Riyad's off-spin. As the partnership was broken, Nazmul XI saw another collapse while Shukkur kept charging. But one shot too many caused his downfall as the ninth batsman.
Ahead of the most important match of the tournament, Mahmudullah XI brought up three changes to their side with Mominul Haque, Sumon Khan and Aminul Islam Biplob replacing Naim Sheikh, Abu Haider Rony and Rakibul Hasan. On the other hand, Nazmul XI also made two changes as Saif Hasan and Nayeem Hassan came in the place of Parvez Hossain Emon and Rishad Ahmed. Nazmul XI earlier won their both games against Mahmudullah XI in the group phase.
Brief Score:
Nazmul XI 173 in 47.1 overs (Irfan Shukkur 75, Nazmul Hossain Shanto 32, Towhid Ridoy 26, Mushfiqur Rahim 12; Sumon Khan 5-38, Rubel Hossain 2-27, Ebadot 1-18)