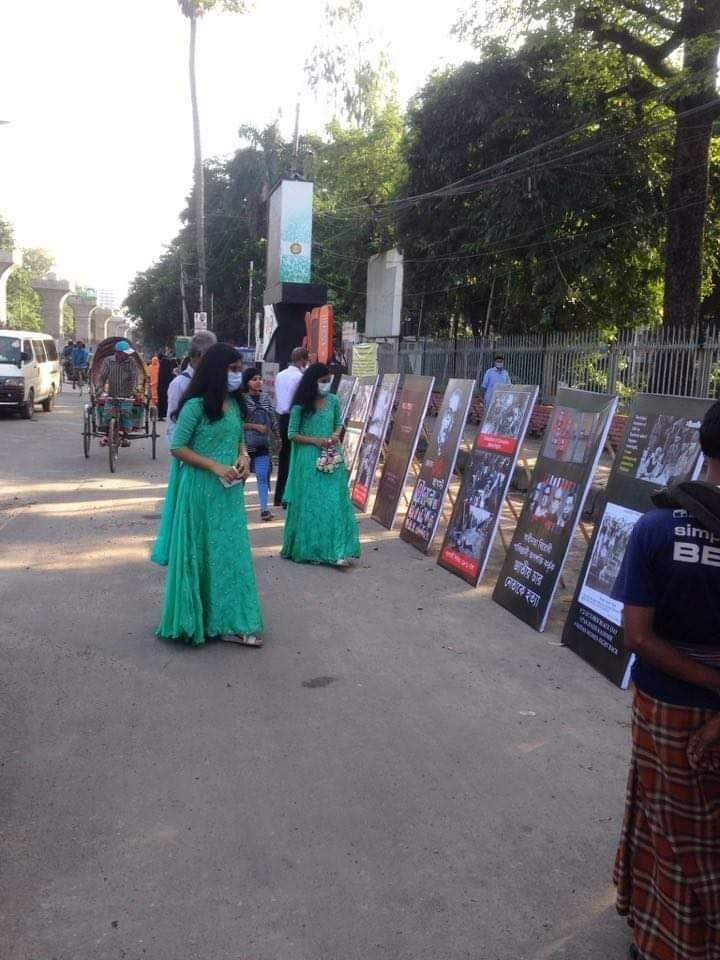 Pro-liberation forces and liberal minded NGOs held a photo exhibition on October 22-25 at Shahbagh, Dhaka to mark the October 22 attack code named ‘Operation Gulmarg’ by the Pakistan led tribal forces/Kabaelis on the innocent Kashmiri population in 1947 to take control of Jammu & Kashmir. The occasion exposed Pakistan’s nefarious designs to spread violence and dichotomy in the entire Asian sub-continent.
The event drew parallel to the 1971 genocide code named “Operation Searchlight” by the Pak army in Bangladesh. The visitors remembered the same brutal forces that massacred and abused their own men and women during the country’s valiant Liberation War of 1971.
More than 40,000 Kashmiri Muslims, Sikhs and Hindus were killed by brutal Pak army and its proxies on October 22, 1947. About 10,000 women were raped and 2000 women forcibly taken to Pakistan. Photos of unabated Pakistani atrocities on Bangladesh and Father of the Nation, August 21 grenade attack aimed to eliminate Hon’ble Prime Minster Sheikh Hasina and 3rd November jail killing Day were prominently displayed by the liberal groups at a photo exhibition on 22.10.20 at the prominent Shahbagh intersection, near the main gate of the National Museum.
About twenty-five assorted photographs depicting October 22, 1947 murderous raid by Pashtun tribes in Kashmir interspersed with visuals of the Liberation Struggle of Bangladesh were displayed in the exhibition.
To mark atrocities committed by about 2000 marauding Tribal militias backed by Pakistan army on 22.10.1947 on hapless citizen of Kashmir, that day is observed as ‘Black Day’ all over the world.
The tribal invasion of 1947 did not happen overnight, it was strategically planned by Pakistan. Large scale atrocities were committed by the invading marauders, civilians were looted, and even hospitals were not spared. The raiders were resisted by valiant Kashmiri people who thwarted the attempts of Pakistani raiders to capture Srinagar airport.
In that background of devastation, Maharaja Hari Singh, the King of the Jammu & Kashmir sought support from the Indian government and signed the Instrument of Accession with India to save his Princely State to be plundered by Pakistan and its stooge invaders. The Indian troops launched a counter offensive and secured Srinagar, the capital city of J&K. Thousands of ‘lashkars’ armed with axes, swords and guns were pushed back by the Indian troops. It was on October 27, the first infantry contingent of the Indian Army the troops of the 1st Sikh landed at Srinagar airfield and began the battle to liberate Kashmir from the intruders.