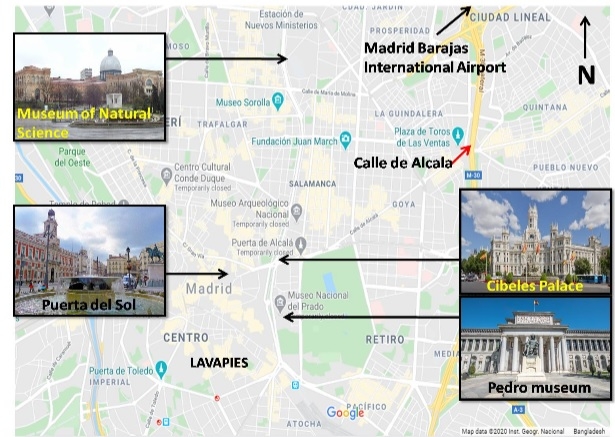 Madrid is the capital of Spain. At around 2nd century BC (BeforeChrist) Roman Empire established a settlement on the banks of the nearby river Manzanares. Still there are archaeological remains of Carpetani settlement and Roman villas. The city came to prominence during the Arab occupation from 711 to 1492 AD (Anno Domini)of the Iberian Peninsulacomprising present day Spain and Portugal. The city became the capital of Spain in the mid-16th century. Madrid has an inland Mediterranean climate. The warmest month is July. Its lifestyle has attracted many immigrants around the world.

After getting Schengen visa I planned a trip to Madrid in the first week of December of 2016. Fortunately I was accompanied by one of my colleagues. We were travelling from Dubai by luxurious A 380 air bus. The aircraft have private suites in first class, flat-bed seats in business class and comfortable seats in economy class. Passengers in all classes can enjoy access to Wi-Fi, films, TV shows, music and satellite phone facilities. The flying hour was around 7 hour 30 minutes.Madrid unveiled its beauty while descending. We were dropped in terminal 4S (Satellite). The terminal have facilities like ATM's, currency exchange, medical services, phone cards, press office, VIP lounges, meeting rooms and prayer rooms. We were transported to terminal 4, which was more than 2 kilometers away by driverless automatic train. After completing passport formalities we came outside. This terminal is served by its own rail line and metro station.
The Madrid Metro line connects the airport with city centre. Other means of transport like bus, car rental and taxi services were also available. The airport is located 9 kilometers northeast of Madrid city centre.We purchased ticket from automated metro booth and our destination was station Nuevos Ministerios.Within few minutes the metro dropped us and we noticed the station was built with sufficient space, lighting and ample entryways.This station is located beneath the New Ministries complex.We refreshed ourselves and came outside.It was almost noon then.We were enchanted by the sudden splash of gentle breeze and by the beauty of this dream city. We started walking towards south.

We came across a beautiful fountain in Plaza de San Juan de la Cruz. Adjacent to this was The National Museum of Natural Science. It has research departments on biodiversity, evolutionary biology, evolutionary ecology, paleobiology, vulcanology, and geology. The streets of Madrid are a veritable museum of outdoor sculpture. Next we came across Centro cultural de la villa. It has theater, assembly hall and exhibitions hall. Its program of events includes theater, dance, music, children shows, exhibitions, talks, conferences and other activities. We saw a marble statue of famous explorer Christopher Columbus at the middle of the adjacent intersection which is really a traffic roundabout. The statue stands on a pretty large pedestal which has a number of reliefs depicting scenes related with his discovery of America carved on it. Columbus is seen wearing a tunic and cape. The statue is also holding a state flag in one hand and with the other is pointing to a particular direction. These impressive and tall statues visible from afar. At its south we saw the National Archaeological Museum. It has archaeological finds from prehistory to the 19th century, especially from the Iberian Peninsula. Its collections of Roman mosaics, Greek ceramics, Islamic art and Romanesque art are distributed in three floors.

A little south of this we came across Cibeles Palace, which is now used as city hall or city council. It is a complex composed of two buildings with white facades. It was originally built in the early 20th century as the main office of the Spanish postal service. Presently exhibitions and cultural events also take place here. Its architecture is a combination of the gothic style with neoclassical elements. The building's facade is elaborately decorated with cartouches and pilasters. The Cibeles Square is just at its north.The famous marble fountain of Cibeles is placed at its centre. It also has a sculpture of a chariot pulled by two lions.

The famous via Calle de Alcala rd touched the adjacent roundabout. This road is of around 10.5 km in length and connected the western edge of the city with the northeastern outskirts. There are plenty of important buildings along this street, including a few theaters and palaces.

From there strolling along the tree-lined avenue, we saw Prado Museum at our left. This place is quite picturesque in all seasons. Just at the opposite side of the road a lurking vertical garden or green wall attracted our attention. It was installed on renovated exterior wall of a former power station. It has small plants from different species and most of it was flourishing. Undoubtedly, the vertical garden is an incredible botanical sculpture, and a piece of unique artwork. We came to know that here PVC plates and metal frame covered with a polyamide felt were used to support the roots of the trees. As part of irrigation water or mist droplets are absorbed by the felt and the root system. Vertical garden gives rise to an urban oasis in dense concrete structures.

At its south east we saw The Palace of Fomento also known as the Ministry of Agriculture Building.It was completed in 1897. The most prominent part of this building is the main facade decorated with tiles, enamelwork, paintings and huge traditional sculpted columns. A group of statues can be seen on top of the building. The prominent Atocha railway station is located at its opposite side.We found a fountainmade of granite and white stoneat the Atocha roundabout. From here crossing the road we started walking towards west and our destination was nearby lavapies area.

Lavapies is the cultural melting pot and most bohemian neighborhood. It has become the focal point for immigrant populations coming from the Indian subcontinent, China, Middle East and Africa. Now its large immigrant population has given it an exotic, cosmopolitan flavor and it draws many visitors. We found many Indian restaurants here. The architecture of this area is uniform with similar height, windows, balconies, pastel colours and shop or apartment set up. Finally, the shop of my friend could be traced. After exchanging gratitude he took us to his nearby apartment. After light refreshment we planned to visit some more places. This time he took us toMuseo del Prado or the Prado Museum. The sun has set by then. Along the way there are several monuments and enclosures that are of historical and artistic interest.It is the main Spanish national art museum. It was founded as a museum of paintings and sculpture in 1819. It is widely considered to have one of the world's finest collections of European art, dating from the 12th century to the early 20th century.The collection currently comprises paintings, sculptures, prints, drawings and historic documents. Here collections are displayed in more than 100 rooms on three floors. Trying to see all in one go was really daunting.The museum also has audio guided facilities.

From there we went to the Puerta del Sol. This spacious town square is also a hub of public transportation. We saw the "Kilometer Zero" point from which all distances on the Spanish national road network are measured.This square witnessed many historic events, starting from the Spanish resistance to Napoleon on May 2nd 1808. Nowadays the square is a place to hang out and enjoy life. The square was very lively and full of spectacular lights as it was eve of Christmas. We saw a several-story high metal Christmas tree made of lights. Really shopping, food, bright lights and crowd gave festive look. At this square we also saw the bear and the madrone tree statue which is depicted on the Madrid coat of arms. After exchanging currency we returned to apartment. The tiring day terminated with a sound sleep.

In the next morning after breakfast we roamed around in the neighboring places. We were informed that the city has highest number of trees and green surface per inhabitant in Europe. In many of the parks people enjoy cycling, walking, running and anaerobic exercise. We visited ruins of religious school Escuelas pias. It had a small library. The north side of the ruins faces the plaza augustin Lara, named after famous Mexican composer. We found a statue of him also in that area. Hiring a car we started for Toledo city, located 73 Kilometers south west of Madrid. This city observed historic co-existence of Muslims, Jews and Christians. The city still bears remnants of many Muslim glories. Here I observed so many things that it demands a separate write-up. On our way I marked here petrol pumps are fully automated. We returned at noon and had our lunch. After short leisure time at evening we left for Calle mendez Alvaro to catch bus for our next destination Paris.On way we were pinched by the cold breeze of winter.

Mohammad Mahmudur Rahman Niaz is a civil Engineer and a serving Military Officer.