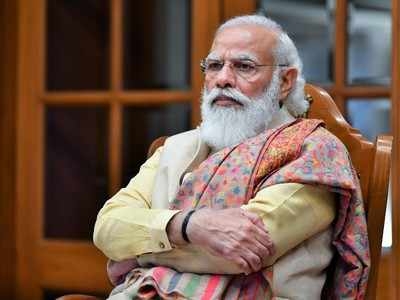 Indian Prime Minister Narendra Modi on Friday held a virtual meeting with top officials including those from the centre's think-tank NITI Aayog on India's strategy for developing a COVID-19 vaccine and making it accessible to the masses, reports NDTV. "Held a meeting to review India's vaccination strategy and the way forward. Important issues related to progress of vaccine development, regulatory approvals and procurement were discussed," PM Modi tweeted. "
Reviewed various issues like prioritization of population groups, reaching out to HCWs, cold-chain Infrastructure augmentation, adding vaccinators and tech platform for vaccine roll-out," he tweeted.Several drug companies are involved in developing a vaccine to fight COVID-19, which has killed millions across nations since its outbreak in China in December last year.Many are in advanced stages of trials and they have reported over 90 per cent effectiveness.
The third phase of human trials of Covaxin, India's homemade vaccine, started at an institute in Odisha today, news agency PTI reported. It was administered to two recruits at the Institute of Medical Sciences and SUM Hospital, the only institute in Odisha chosen by the Indian Council for Medical Research for human trial of the vaccine, said E Venkata Rao, principal investigator of Covaxin human trial.
Vaccine maker Serum Institute of India's CEO Adar Poonawalla on Thursday said the Oxford COVID-19 vaccine should be available for healthcare workers and the elderly by February next year and by April for the general public. He said it would be priced at a maximum of ? 1,000 for two necessary doses for the public, depending on the final trial results and regulatory approvals.
India's fresh coronavirus infections rose by 45,882 in the past 24 hours to touch 90,04,365, government data shows. Recoveries surged to 84.28 lakh, pushing the national recovery rate to 93.6 per cent. Up to 584 people died of the disease since Thursday, the overall number till now being 1,32,162. Up to 4,43,794 active cases remain in the country.