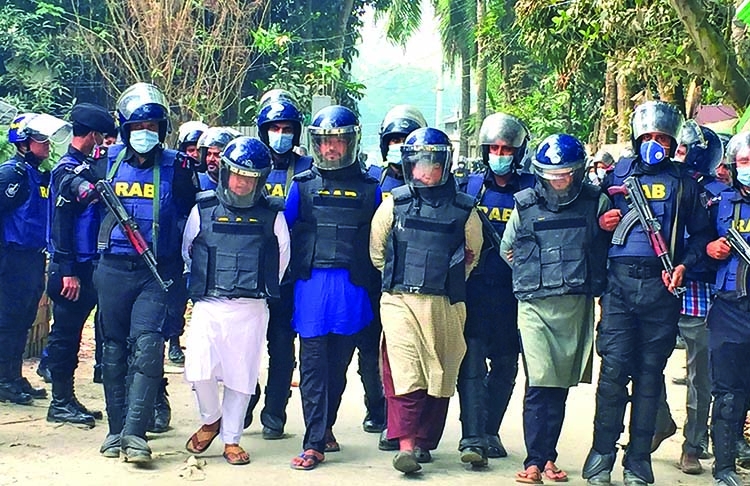 Four suspected militants of JMB were detained from a hideout in Shahjadpur upazila of Sirajganj district on Friday. -AA
The Rapid Action Battalion (RAB) has detained four suspected militants, including two top regional leaders of the banned Islamist outfit Jamatul Mujahideen Bangladesh (JMB), from a hideout in Sirajganj's Shajadpur upazila.
They surrendered after a seven-hour standoff with elite police unit, who had cordoned off a tin-roofed house in Ukilpara ahead of a raid on Friday. RAB recovered two foreign-made pistols, bomb-making materials and books on radical ideologies inside the house.
The arrestees were identified as Kiron alias Shamim, Naimul Islam from Pabna, Atiar Hossain from Dinajpur and Aminul Islam from Satkhira. RAB officials said they had cordoned off the house in the municipality's Ukilpara neighbourhood since 5am on Friday morning, based on information provided by militants detained the previous day.Confirming the matter, to the local journalists at a press conference Lt Col Tofayel Mostafa Sarawar, Additional Director RAB operations chief, said four suspected militants surrendered.
There was a loud explosion in the house in the morning. A senior RAB official told the media that the house was used as a training center by the extremists.On Thursday night, four militants, including JMB Rajshahi's Shah Makhdum unit chief Mahbub, were arrested, said Acting Company Commander of Sirajganj RAB-12 Md Mohiuddin Miraj. He raid in Sirajganj was conducted based on information provided by Mahbub.