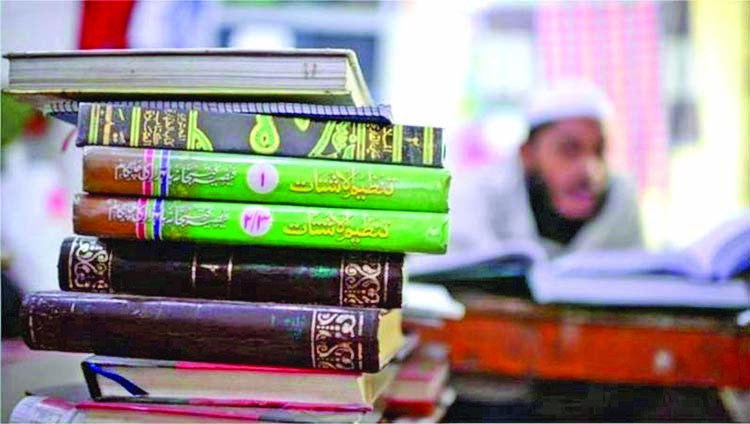 uAA News Desk
The local administration has started investigation into a case filed over the vandalizing of a madrasa and a mosque of the followers of Ahle Hadith in Saltha upazila of Faridpur.In the case, allegations have been made against the supporters of local Hefazat-e-Islam and Qawmi madrasas over the incident.
The director of the masdrasa said that several hundred people had vandalized their mosque and madrasa and now they were feeling insecure. For their part, local Hefazat leaders said that as a Qawmi student was beaten up by Ahle Hadith men, people became agitated and vandalized the madrasa.
A year ago, the followers of Ahle Hadith set up the madrasa at Kamadia village under Saltha upazila of Faridpur. The madrasa, upto class VI, is residential. There is a mosque inside the madrasa. When several hundred people attacked the madrasa last Wednesday, there were two teachers and 35 students in the madrasa.
The teachers and students saved themselves by fleeing to a nearby jungle, the madrasa's director, Ilias Hossain, said. He added that the children had been sent to their guardians with assistance from the administration. The attack was carried out through instigating people by announcements on loudpeakers and holding rallies for several days, he alleged. Ilais Hossain said, "We are being threatened to withdraw the case. Other-wise, they (the attackers) will kill us. They also threaten us that we must leave the area."
The supporters of local Hefazat-e-Islam and Qawmi madrasas gave statements against Ahle Hadith, creating a tense situation, he further alleged.In such a situation, the upazila administration held a meeting with both parties on Tuesday, with the second phase of the meeting scheduled to be held the following day.
Representatives from both groups were present at the UNO office that day. But the anti-Ahle Hadith group arranged a rally and an attack was carried out on the madrasa.Denying the allegations, Md Nizam Uddin, a leader of Hefazat-e-Islam of Saltha upazila, said, "A tense situation was created as the followers of Ahle Hadith beat up a Qawmi madrasa student."
"Some five followers of the so-called Ahle-Hadith have started to derail Muslims from the right path by setting up a madrasa. We forbade them earlier. But they did not pay heed to our objections. As a result, we informed the administration and a meeting was held with the participation of both groups," he further said.The madrasa authorities have filed a case naming 28 people. The investigation has started to identify the attackers, police said.
Saltha Upazila Nirbahi Officer (UNO) Mohammad Hasib Sarker said that the activities of the Ahle-Hadith madrasa had remained suspended."We will try to resolve the issue through discussions with all", he further said.The UNO said, "At the moment, the situation is tense. For this reason, we will reach a decision through discussions after the situation becomes normal."Security has been beefed up in the village where the Ahle Hadith madrasa came under attack in order to tackle further untoward incidents, said police.
---BBC