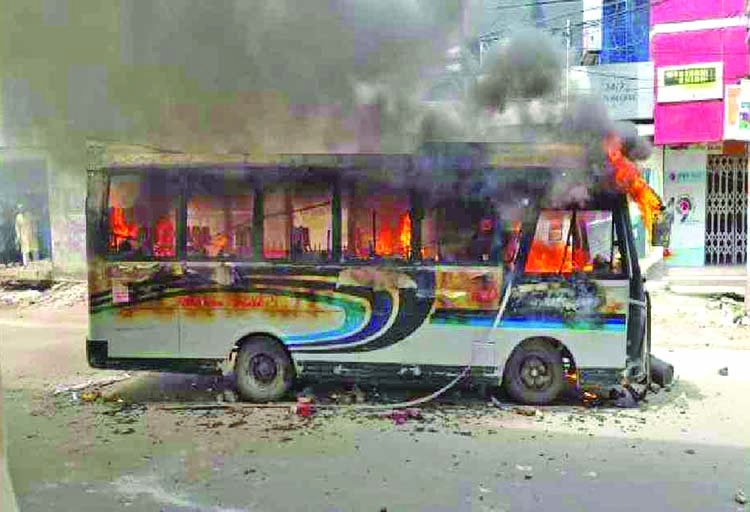 Detectives in a drive on Saturday arrested three people from Paltan area in  the city in connection with the recent arson attacks on buses in different parts of the capital.The arrestees were identified as Mohammad Lian Haque, 30, a Jubo Dal activist, Kazi Rezaul Haque Babu alias Jim Bbu, 28, former  joint secretary of Paltan unit Chhatra Dal and Mohammad Azad, 28, an activist of Jubo Dal, reports UNB.
Tipped off, a team of DB police arrested the trio from the city's Paltan area in the morning, said Additional Commissioner (DB)of  Dhaka Metropolitan Police (DMP) AKM Hafiz Akhter at a press briefing at the  media centre. After primary interrogation police came to know that they carried out the attacks in a bid to destabilise the country through creating anarchy at the directives of BNP leaders, he said.
Eleven buses were set on fire in different parts of the capital including Motijheel and Paltan areas on November 12. Four cases were filed in this connection. Meanwhile, Detective Branch (DB) of Dhaka Metropolitan Police (DMP) recovered 31 unexploded crude  bombs from an under construction building of Uttara sector 10 in the city on Friday.