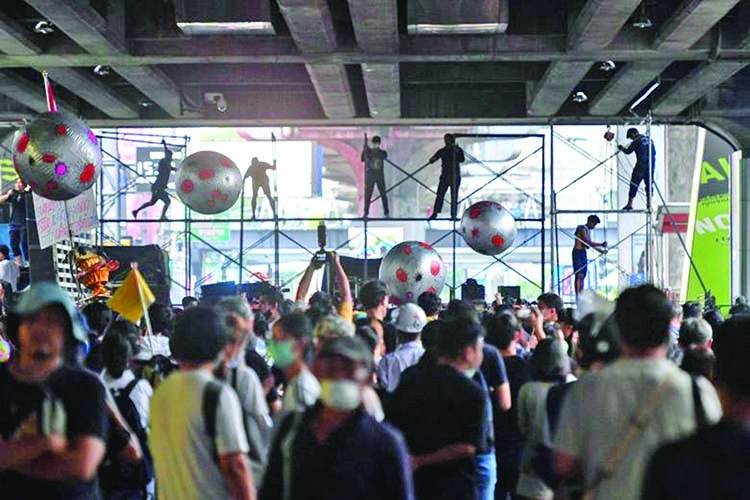 Workers set up a stage as protesters take part in a 'Bad Student' rally in Bangkok, on Saturday. -AFP
Thousands of people joined a protest led by high school students in Bangkok on Saturday to call for education reforms as well as the demands of a broader movement pushing to remove the government and curb the powers of the monarchy.It was the first major protest since Prime Minister Prayut Chan-o-cha said on Thursday that police would use all laws against protesters, who have become the biggest challenge to the establishment in years.
Police said the protest by the Bad Student group could go ahead, although two of its teenage leaders were summoned on Friday for charges over a previous protest. "We are here to ask for the freedom that has been taken away from us as well as for reforms to education," said high school student Mameaw, 18, who declined to give her full name. "We want a real constitutional monarchy." Protests since July have three core demands: the removal of former junta leader Prayuth as prime minister, a new constitution and reforms to the monarchy of King Maha Vajiralongkorn.
But the high school students also seek greater freedom and fairer treatment within an education system they say is archaic and aimed primarily at inculcating obedience. Many spoke of the importance of gender equality.
"I have been sexually abused by teachers. School is not a safe place," said a placard held by one student who sat in uniform with her mouth taped shut in protest. One of the hashtags used by the Bad Student group on Saturday translates as #ByeByeDinosaurs. Government spokesman Anucha Burapachaisri said the prime minister hoped protesters would exercise their freedom constructively and within the law.
Prayut has rejected the demand of protesters that he resign and their accusations that he engineered last year's election to keep power that he first seized from an elected government in 2014. The Royal Palace has made no comment since the protests began in July.
---Reuters, Bangkok