Two men and the world they changed 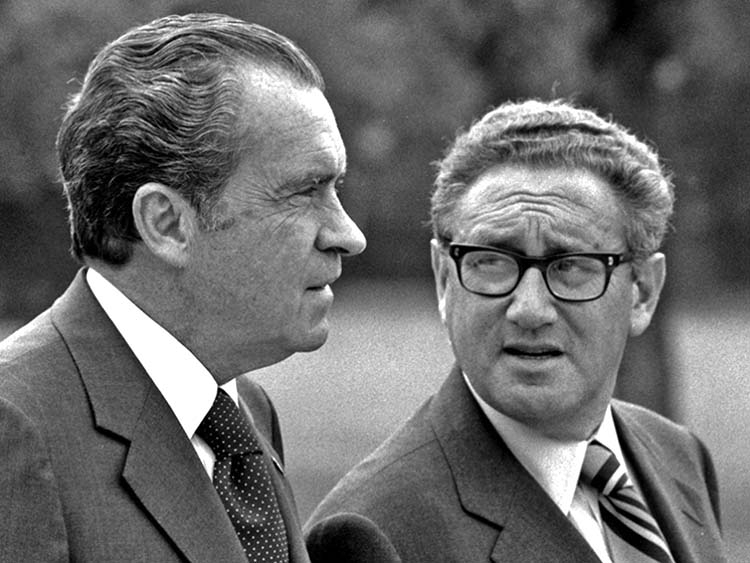 Richard Nixon and Henry Kissinger
Both men were obsessed with coming by power and using it to the full. Both were arrogant and looked down on the world around them in huge disdain. And both, in the end, were recipients of less than admiration in the world of geopolitics. That is the core message which springs from Robert Dallek's analysis of the Richard Nixon and Henry Kissinger in Partners in Power. If there are people who still think Nixon and Kissinger were meant for each other, in that political sense of the meaning, they must brace themselves for some very hard truths. One of those truths is the degree of dislike the 37th President of the United States had for his secretary of state-cum-national security advisor.
Begin with Kissinger. His has been a lifelong tale of looking for acceptance, in that schoolboyish sense of the term. As a refugee from Germany, having fled to the United States with his parents, Kissinger developed the usual syndrome of the dispossessed trying to overcome their past by aiming for the future.
And he did well academically, eventually making his way to Harvard, as a student and then as a teacher. But that did not whet his appetite for power and influence. When the Kennedy administration came in, he went all the way to find a place in it. It was only people like McGeorge Bundy who blocked his path. They clearly felt Kissinger was an upstart who obviously meant to upstage others.
President Kennedy was not impressed by him. In the next few years, though, a Republican presidential hopeful, New York governor Nelson Rockefeller, was taken in by Kissinger. The Harvard academic would go on to be a senior advisor to Rockefeller, in the belief that the latter would someday make it to the White House.One of the biggest ironies of modern American politics is the way Nixon and Kissinger found each other. In his years out of office, Nixon burnished his foreign policy credentials through travelling and writing for such prestigious journals as Foreign Affairs.
For his part, Kissinger did almost likewise. More importantly, perhaps acknowledging the reality that Rockefeller's presidential ambitions now amounted to nothing, Kissinger made careful overtures to the Nixon camp which, for its part, had already begun to take interest in his analyses of foreign policy at a time when the Vietnam War threatened to tear American society apart.
By 1968, as Nixon took his second shot at the White House and as opinion polls indicated a victory for him in November, Kissinger kept watch on the Paris peace negotiations between North Vietnam's Xuan Thuy and President Johnson's representative Averell Harriman. It was at this point that Nixon launched his 'peace with honour' campaign for Vietnam, prompting speculations that his staff went busily into the job of convincing an increasingly hapless President Nguyen Van Thieu of South Vietnam that he ought to keep any deal over the war at bay --- because a Nixon presidency would have better propositions on offer.
And that was the beginning. In the years after January 1969, when Nixon was sworn in as President, and until August 1974, when Watergate forced him out of office, Henry Kissinger and the president enjoyed a partnership that was as bizarre as it was constructive. The bizarre was in the huge degree of distrust that underlined relations between the two. Kissinger's temperament, always massaged by Nixon, constantly undermined Secretary of State William Rogers. Through gradual steps, Kissinger arrogated to himself the rights and responsibilities relating to foreign policy that were properly Rogers'.
He and Nixon took almost perverse pleasure in speaking of the State Department with contempt. The contempt would go so far as to keep Rogers out of the whole deal on the national security advisor's secret visit to Peking in July 1971. And yet the truth was that the president was not initially keen on sending Kissinger to meet China's leaders.
Nixon was right in believing that Kissinger would in future take credit for initiating Washington's China policy. The president, obsessed with his place in history, wanted everyone --- and that included Kissinger --- to know and spread the word that the new turn in America's China policy was fundamentally his innovation.
Henry Kissinger was not averse to letting his aides know what he thought of Nixon behind his back. The president was a 'madman'. Equally maddeningly, Nixon thought Kissinger was an overgrown child in constant need of reassurance. Between them, though, they left a whole world changed, for better or worse.
Their flaws were monumental. Both undermined governments they did not approve of, Chile's for instance. They looked away from Pakistan's atrocities on its Bengali population; and they dragged Cambodia into a conflict in their perverse belief that extending the war into its territory would halt supplies to the Vietcong.
In the end, both men saw their reputations take a nosedive. Nixon went through the humiliation of Watergate and became the first president in United States history to be forced to resign. Kissinger has been repeatedly excoriated by analysts for what they see as his Machiavellian contributions to global affairs. Dallek makes a compelling case for himself in this pretty revealing work.