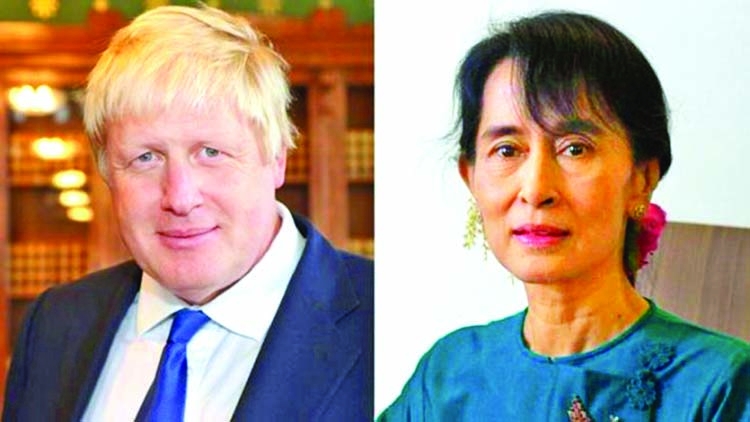 Boris Johnson has spoken to Myanmar's State Counsellor Aung San Suu Kyi and raised the UK's ongoing concerns over the Rohingya crisis and conflict in Rakhine.During a telephone conversation on Friday, the British Prime Minister and Suu Kyi discussed the challenges facing Myanmar, report agencies.
He began by congratulating her on her party's recent electoral victory, according to British Prime Minister's office. The election mark another important step in Myanmar's transition to democracy, said the British Prime Minister.The two leaders discussed how their countries can work together to tackle the coronavirus pandemic.Ahead of the UK hosting COP26 next year, they also agreed on the importance of combating climate change.
The British Prime Minister reaffirmed the UK's commitment to the wider Indo-Pacific region and to a closer partnership with ASEAN.The human rights situation in Myanmar deteriorated, particularly in Rakhine and Chin states, and civilians increasingly bore the brunt of the conflict, said the Foreign, Commonwealth & Development Office in a ministerial statement on human rights priority countries on Friday.
The UK called on Myanmar to abide by the International Court of Justice's provisional measures ruling; however, the Rohingya continue to be deprived of basic rights and dignity. The UN reported that more children were killed or maimed between January and April than in the first half of 2019.There were also widespread reports of arbitrary arrests, torture, deaths in custody, burning of villages, conflict-related sexual violence, and "clearance operations" in conflict areas, perpetrated by both the Myanmar military and ethnic armed groups, said the UK statement.