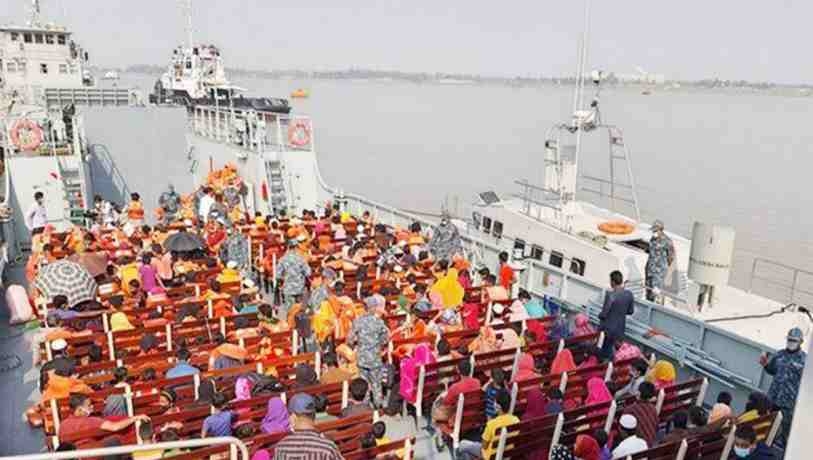 The first batch of 1,642 Rohingyas from Ukhiya’s Balukhali camp in Cox’s Bazar have started for Bhasan Char from Chattogram under the supervision of the Navy.   Eight ships carrying the forcibly displaced Myanmar nationals left the port at 9am on Friday after an overnight stay at a temporary transit camp at the BAF Shaheen College.   Bangladesh is hosting more than 1.1 million Rohingyas most of whom came here from their homeland in Myanmar since Aug 2017. Bangladesh has been urging the global community to mount pressure on Myanmar for effective repatriation of the Rohingyas.
The government plans to shift some 100,000 Rohingyas to Bhasan Char in phases. Located 34 kilometers from the mainland, the island surfaced 20 years ago and was never inhabited.
Contractors say its infrastructure is like a modern township, with multifamily concrete homes, schools, playgrounds and roads. It also has solar-power facilities, a water supply system and cyclone shelters.
Foreign Minister AK Abdul Momen on Thursday said the Rohingyas are not being taken there forcibly.
He recently said Rohingyas will "jeopardise regional and international security" if they are left unattended and not given the opportunity to return to their homeland.