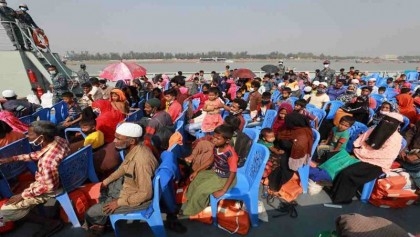 Bangladesh has urged all to exercise utmost caution not to undermine or misinterpret the genuine efforts of the government of Bangladesh noting that the voluntary relocation of Rohingyas to Bhasan Char has become imperative to decongest the overcrowded camps in Cox's Bazar.
"The Rohingyas are Myanmar nationals and they must return to Myanmar. The government of Bangladesh is doing its best for the safety and security of these temporarily sheltered Myanmar Nationals," said the Ministry of Foreign Affairs (MoFA) in a statement on Friday.
Bangladesh has encouraged human rights groups to put their efforts in creating a conducive environment inside Myanmar for their quick, safe and dignified repatriation to their land of origin, Myanmar.
At this stage, it is only practical that the international community, including the United Nations, fulfills its responsibility and meaningfully engage with Myanmar to start repatriation, which is the only durable solution to this crisis, the statement reads.
In the face of growing concerns over the extreme congestion in Cox’s Bazar camps and to avert any risk of death due to landslides and other unwarranted incidents, the government of Bangladesh has decided to relocate, in phases, 1,00,000 Rohingyas to Bhashan Char.
Accordingly, in the first phase, more than 1,600 Rohingyas who expressed their willingness voluntarily for relocation were shifted to Bhashan Char on Friday.
The relocation has become imperative to decongest the overcrowded camps in Cox’s Bazar that have temporarily been accommodating nearly a million of Rohingyas with many more thousands born each year, said the MoFA statement.
It said the deteriorating security situation due to prolonged stay of these frustrated people in Cox’s Bazar also compelled the government of Bangladesh to come up with a contingency plan and develop Bhashan Char from its own budgetary allocation.
Accordingly, the government invested more than USD 350.00 million to develop the island.
The 13,000 acres of island has all modern amenities, year-round fresh water, beautiful lake and proper infrastructure and enhanced facilities, MoFA said.
These include uninterrupted supply of electricity and water, agricultural plots, cyclone shelters, two hospitals, four community clinics, mosques, warehouses, telecommunication services, police station, recreation and learning centers, playgrounds, etc.
Unlike the makeshift structures of the camps in Cox’s Bazar, the accommodation in Bhashan Char is strongly-built with concrete foundation which can withstand natural disasters such as cyclones and tidal waves, said the government.
Super Cyclone Amphan proved the strength of the structures of Bhashan Char, it said.
Contrary to the apprehension of some quarters about the feasibility of the island, Bhashan Char stood firm against the massive storm, said the government.
Despite the heightened tidal wave, all the 1,440 houses and 120 shelter stations in the island remained unharmed, the statement said.
The island is connected with the mainland through waterways.
The MoFA said the government of Bangladesh has ensured adequate supply of food along with proper sanitation and medical facilities for Rohingyas in Bhashan Char.
Appropriate hospitals with highly-qualified health professionals, adequate Covid testing and treatment facilities are there in place, it said.
In addition to government agencies, around 22 NGOs are already there to extend all possible support to the relocated Rohingyas.
Adequate security has been ensured in the island with the deployment of police personnel, including female police and the area is fully covered with CCTV cameras.
On the relocation, the government said its position was very clear and transparent from the very beginning that any relocation would be entirely on a voluntary basis.
Accordingly, a good number of Rohingya representatives undertook a “go-and-see” visit to Bhashan Char to see the facilities and make an independent and informed choice, MoFA said.
A number of NGOs and journalists also visited the island.
All of them expressed their high satisfaction at the available facilities in Bhashan Char, MoFA said.
A media team and a group of senior journalists are already in Bhashan Char.
More importantly, the relocation was preceded by adequate preparations and consultations held with different stakeholders, the ministry said.
"Several rounds of discussions, based on the queries of the United Nations, were also arranged and we hope that the international community and the United Nations, as per its mandate, will be involved in the process very soon," the statement reads.
The relocation is part of the broader plan of repatriation which is the only priority for the Government of Bangladesh.
MoFA said the skill development and livelihood opportunity that the Rohingyas would be able to avail in Bhashan Char would prepare them for their reintegration in the Myanmar society on return.
The types of economic activities such as fishing, agriculture, goat rearing, etc that they used to pursue in Rakhine state are available in Bhashan Char.
When the persecuted Rohingyas from Myanmar were fleeing en masse from the violence, persecution and atrocities in the hands of their own people in their own land, it was Bangladesh who, purely out of humanitarian gesture, responded immediately and opened her borders and thus saved nearly a million of precious lives, MoFA reminded the international community.
The generous people of Bangladesh offered all kinds of assistance to these persecuted Myanmar nationals before any international humanitarian agency stepped in, said the government.
"We set another unique example of humanity in the world by developing a modern island to temporarily accommodate some of these persecuted Rohingyas," the statement reads.