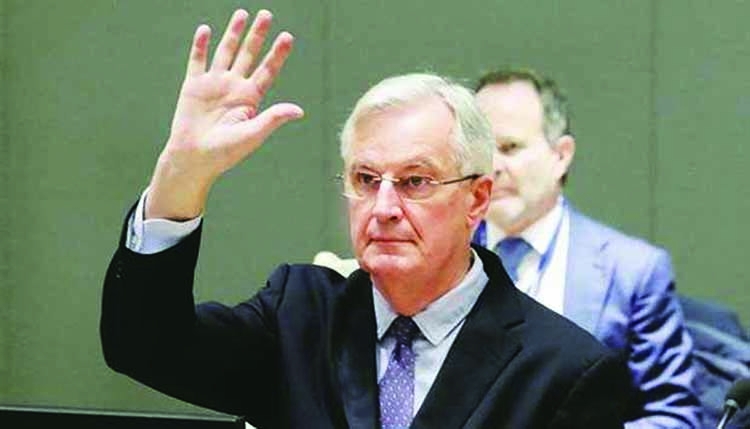 Chief EU negotiator Michel Barnier raises his hands during a meeting of ambassadors of European Union government in Brusells on Monday. -AFP
Chief EU negotiator Michel Barnier on Monday signalled there was a "narrow path" to a post-Brexit trade deal with Britain, as key sticking points remain after both sides abandoned a supposed make-or-break deadline.
British Prime Minister Boris Johnson and EU chief Ursula van der Leyen pledged on Sunday to "go the extra mile" as they side-stepped the self-imposed cut-off point to end talks if there was no progress towards a pact.Britain left the EU on January 31 after five decades of integration, but a transition period during which it remains bound by the bloc's rules ends on December 31.
Without a post-Brexit deal, Britain's trade with its biggest market would in future operate on pared-down World Trade Organization (WTO) rules, including tariffs and quotas.Johnson has insisted it remains "most likely" that Britain will crash out of the globe's largest single market by year's end as the two sides spar over regulating future standards and on fishing rights.But von der Leyen said on Monday: "There is movement. That is good".
"We are on the very last mile to go. But it is an essential one," she told a conference organised by the Organisation for Economic Cooperation and Development.An EU diplomat said following a briefing from Barnier that "there might now be a narrow path to an agreement visible - negotiators can clear the remaining hurdles in the next few days".

But "substantial gaps still need to be bridged in important areas like fisheries, governance and level playing field," the diplomat said.An EU source said London had now accepted there should be a mechanism to regulate any future divergences in standards.More serious blockages remain "on all fronts" on the issue of fishing rights, the source said.
"If there is progress on fishing then we could have an agreement in the coming days," the official said.Johnson's official spokesman did not say whether there had been any progress and insisted no deal remains a "possible outcome".Barnier was meeting Monday in Brussels with British counterpart David Frost for more talks aimed at thrashing out a deal.
Barnier said on Twitter that "the next few days are important" if a deal can be found and insisted the two sides had a "responsibility to give the talks every chance of success".Von der Leyen and Johnson have not set a new deadline and there are fears there may be an accidental no-deal if talks go right to the wire.
Irish Prime Minister Micheal Martin, whose country stands to be hit hard by a no-deal Brexit, told RTE that the "real end deadline is New Year's Eve, although I think both sides are very possessed of the need to try and get outcomes to these negotiations in the next number of days".France's Europe Minister Clement Beaune said he did not expect the negotiations to go "beyond the coming week" as any deal would still need to be signed off by the 27 EU member states and the European and British parliaments.
Germany said Monday it is still rooting for a Brexit deal."The hand of the European Union remains outstretched. We still want to achieve a good result for citizens on both sides of the Channel," Berlin's Europe minister Michael Roth told AFP.
German Foreign Minister Heiko Maas had earlier on Monday said talks should continue "as long as an agreement is possible".Key log-jams remain on a raft of thorny issues and a second EU diplomat said there were "serious difficulties" on fishing rights, with London adamant it wants to assert full rights over its territorial waters.
Britain insists it will not be tied in perpetuity to rules it claims would be set by Brussels."Any deal that we get with the EU has to respect the fact that we are a sovereign country, we are an independent country and that's the basis on which we will do a deal if there's a deal to be done," Business Secretary Alok Sharma told journalists."Of course we are continuing to talk, that's what people expect. Where there is life there is hope."
Britain left the EU in January and has been in a standstill period while both sides try to agree the terms of their new relationship.Without a deal, cross-Channel trade will revert to WTO rules, with tariffs driving up prices and generating paperwork for importers, and the failed negotiation could poison relations between London and the continent for years to come.
The British government insists that Britain is ready to leave the union and handle its own affairs after 47 years of close economic integration with Europe.The government says it is ready to offer hefty new support for sectors in the firing line such as farming and autos, but British business groups are aghast at the lack of clarity on future trading rules.
---AFP, Brussels