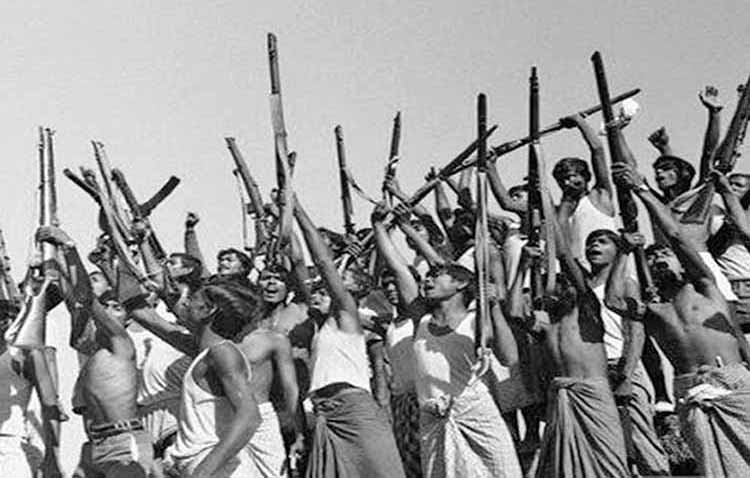 Bangladesh, geographically , bordered by India on three sides -West, North and East and a short strip of land of Myanmar also borders in the East while on the south lies the Bay of Bengal with its warm blue water. The hills at its head  (on the North and Eastern parts, an extension of the Himalayan ranges) keeps the country safe from cold waves from Siberian belt  and at the feet the Bay of Bengal balances the hot temperatures of its being on the tropical cancer line.
Bangladesh is a deltaic plain of the three major river systems of South Asia - the Ganges ( in Bangladesh it is the Padma), the Brahmaputra and the Meghna, the land is formed with the alluvial soil of these rivers. Green paddy fields and vegetation are found all around. The most significant characteristic of the landscape of Bangladesh is its extensive networks of rivers and magnificently moving monsoons contributing a great deal to shape the socioeconomic life of the country.
The population of Bangladesh is now over 149  million ( 2011 census) growth rate now being 1.37%, is one of the most densely populated countries (1015  per sq. km.), 76% of the population live in the rural areas. According to Labour Force Survey ( 2010), of the total 54 million labour population ,male 38 million (70%) and female 16 million (30%). Per capita gross national income (PCGNI) is $1044 in 2013. In terms of human development Index, Bangladesh ranked 146 out of 182 countries. (Human Development Index, HDI, UNDP 2013) .
Bangladesh was a prosperous region of South Asia until modern times. It had the advantages of a mild, almost tropical climate, fertile soil, ample water, and an abundance of fish, wildlife, and fruit, forming a favourable standard of living comparing with other parts of South Asia. As early as the thirteenth century, the region was developing as an agrarian economy. It was not entirely without commercial centers, and Dhaka in particular grew into an important entrepôt during the Mughal Empire. The British, however, on their arrival in the early seventeenth century, chose to develop Kolkata as their commercial and administrative center in South Asia.
The development of Bangladesh was thereafter limited to agriculture. The colonial infrastructure of the eighteenth and nineteenth centuries reinforced of this land's function as the primary producer--chiefly of rice and jute--for processors and traders in Kolkata and beyond. Some of the same factors that had made Bangladesh a prosperous region became disadvantages during the nineteenth and twentieth centuries. As life expectancy increased, the limitations of land and the annual floods increasingly became constraints on economic growth. Traditional agricultural methods became obstacles to the modernization of agriculture.
Geography severely limited the development and maintenance of a modern transportation and communications system. The partition of British India and the emergence of India and Pakistan in 1947 severely disrupted the former colonial economic system that had preserved Bangladesh  (then  East Pakistan) as a producer of jute and rice for the urban industrial economy around Kolkata. East Pakistan had to build a new industrial base and modernize agriculture in the midst of a population explosion.
The federal government of Pakistan expanded the cultivated area and some irrigation facilities, but the rural population generally became poorer between 1947 and 1971 because improvements did not keep pace with rural population increase. Pakistan's five-year plans opted for a development strategy based on industrialization, but the major share of the development budget went to the then West Pakistan.
The lack of natural resources meant that East Pakistan was heavily dependent on imports, creating a balance of payments problem. Without a substantial industrialization program or adequate agrarian expansion, the economy of East Pakistan steadily declined. Blame was on the West Pakistani leaders who not only dominated the government but also most of the fledgling industries in East Pakistan.
The economic situation faced Bangladesh as it emerged from the liberation war in 1971 included the highest rural population density ,chronic malnutrition for the majority of the people, and the dislocation of between 8 and 10 million people who had fled to India and returned to independent Bangladesh by 1972. The new nation state  had few experienced entrepreneurs, managers, administrators, engineers, or technicians. There were critical shortages of essential food grains and other staples because of wartime disruptions.
External markets for jute had been lost because of the instability of supply and the increasing popularity of synthetic substitutes. Foreign exchange resources were minuscule. Commercially exploitable industrial resources, except for natural gas, were lacking. The liberation war had crippled the transportation system. Hundreds of road and railroad bridges had been destroyed or damaged. and rolling stock was inadequate and in poor repair.
Through the decades Bangladesh economy has experienced mixed developments in  both macro-economic stability and robust economic growth. At  the backdrop of the deep macro-economic crisis until late 1980s, a series of stabilization measures were introduced in the Bangladesh economy which largely restored macro-economic stability in the early 1990s. Subsequently, the Bangladesh economy registered an average GDP growth rate of 5 per cent in the 1990s .Despite of such impressive growth  the per capita income of Bangladesh, continued to be the  lowest among the South Asian countries and also below the average per capita income of the least-developed countries (LDCs).

Bangladesh Economy was facing the most severe exigency after the macroeconomic crisis since 1970s , however , the  achievements of the 1990s fell  under threat because of the twin shocks emanating from large fiscal deficit and deteriorating balance of payment position which exposed the entrenched vulnerabilities of the Bangladesh.. The pressure accentuated by a benign neglect in undertaking necessary reform measures to improve the competitiveness of the economy.
Within the real economy sectors such as Industry demonstrated stronger growth during the first half of the 1990s as against the impressive performance of the Agriculture all through. In fact , in the 1990s both Agriculture and Industry emerged as the major source of GDP growth in comparison to more pronounced role of the Service Sector in the earlier .Later  Service Sector  dominates as the major source of GDP growth and accounted a significant share .
In spite of improved growth, the evolution of the Bangladesh's economy still remains biased against modern, industrial transformation having concomitant implications for sustained growth and equitable income distribution. Weaknesses in the domestic resource mobilization effort have emerged as one of the major structural constraints facing the Bangladesh economy .Though the share of revenue (tax and non-tax together) in the GDP has increased from 7.5 per cent in FY1978 to 11.34 per cent in FY12-13, nonetheless one observes a plateauing of the revenue-GDP ratio , the revenue receipts in Bangladesh, as a share of GDP, is still lower than many developing countries.
The success of revenue earning since the early 1990s has been  greatly triggered by the introduction of VAT. The VAT has been providing  a bigger source of revenue compared to the taxes it replaced, mainly in respect of taxation of domestic production. Such a feat has been possible thanks to spectacular success in meeting the revenue collection target by the NBR in recent years. The largest part of the nontax revenue--making up 15-20 percent of the revenue budget are also coming from the nationalized sector of the economy, including industrial enterprises, banks, and insurance companies.
Even by the standards of developing countries, Bangladesh's ratio of taxes to GDP, and of direct tax revenue to total tax revenue, has been very low. In 1984 taxes amounted to only 8.1 percent of GDP, just half the percentage for India, less than half the average for 82 other developing countries, and far below the average of 29.7 percent for the developed countries. Similarly, the 20.1 percent of tax revenue coming from direct taxation was one of the lowest in the world (the average for developing countries was 29.3 percent, for industrialized countries 34.2 percent).

(The writer is a retired Secretary and former Chairman, NBR)