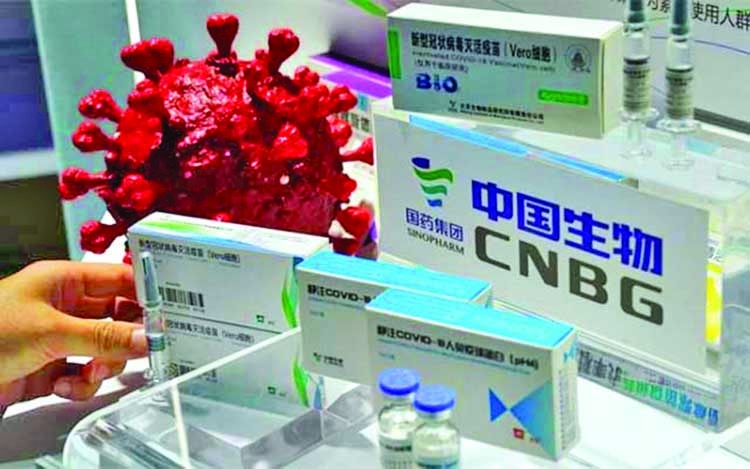 China approved its first Covid-19 vaccine for general public use on Thursday, a shot developed by an affiliate of state-backed pharmaceutical giant Sinopharm, as it braces for greater transmission risks over the winter. No detailed efficacy data of the vaccine has been publicly released but its developer, Beijing Biological Products Institute, a unit of Sinopharm subsidiary China National Biotec Group (CNBG), said on Wednesday its vaccine was 79.34% effective in preventing people from developing the disease based on interim data.
The approval, announced by the National Medical Products Administration, comes after the United Arab Emirates this month became the first country to roll out the vaccine to the public, and as Pakistan announced a 1.2 million dose purchase deal with Sinopharm, reports Reuters.While China has been slower than several other countries in approving COVID-19 vaccines, it has been inoculating some citizens for months with three different shots still undergoing late-stage trials.
China launched an emergency use programme in July aimed at essential workers and others at high risk of infection, had administered more than 4.5 million doses as of Dec 15 using at least three different products - two developed by CNBG and one by Sinovac Biotech.While the efficacy of the Sinopharm shot trails the more than 90% success rate of rival vaccines from Pfizer Inc and its partner BioNTech SE and Moderna Inc, it points to progress China has made in the global race to develop successful COVID-19 vaccines.
China has at least five vaccines, developed by Sinovac, CNBG units, CanSino Biologics and the Chinese Academy of Sciences, in late stage trials, underscoring its efforts to develop a homegrown vaccine to challenge Western rivals.President Xi Jinping has pledged to make China's vaccines a global public good and it has won several large supply deals with countries including Indonesia and Brazil - the most populous countries in Southeast Asia and Latin America respectively.
WATCHING THE DATA
The efficacy and safety data of China-made vaccines is being closely watched by many developing countries as they have limited early access to shots developed by Western drug makers and are looking for alternatives from China and Russia.
"China's approval could boost the credibility of the vaccine," said Dong-yan Jin, a professor at the University of Hong Kong."But if the vaccine wants to take a share in the global market, especially in developed countries, more data is necessary."A Sinopharm executive told a briefing detailed data would be released later and published in scientific journals at home and abroad.While China has kept new outbreaks of the coronavirus under control, it is ramping up the emergency programme to contain the risks over the winter. The virus emerged a year ago in a market in the central city of Wuhan.The South China Morning Post newspaper reported that China would vaccinate as many as 50 million people from high-priority groups before the Lunar New Year holiday in February.
"We call on people ... to take an active part in vaccination to protect themselves, family members and others, which is also contributing to global epidemic control," Zeng Yixin, an official with National Health Commission, told a briefing on Thursday.The price of the vaccine would depend on the scale of use, but the "premise" was that it would be free for the public in China, he said.The approval comes as Britain on Wednesday approved a second COVID-19 vaccine, a shot developed by Oxford University and AstraZeneca, as it battles a major winter surge driven by a new variant of the virus.