US endures pandemic's deadliest day with over 4,000 deaths 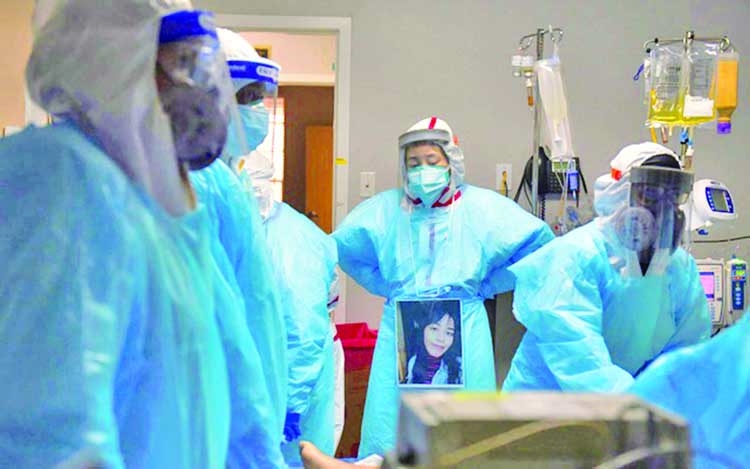 As the events that unfolded in Washington on Wednesday captured the nation's attention, the raging coronavirus pandemic claimed its highest US death toll yet, killing more than 4,000 people in a single day, according to a Reuters tally.
COVID-19 hospitalisations stood at 132,051, setting a grim record for the fourth day in a row as of late Wednesday night, a Reuters analysis of public health data showed.
As thousands of mostly unmasked supporters of President Donald Trump laid siege to the US Capitol building, daily reported cases of the novel coronavirus soared again past the 250,000 mark, taking the total case tally to 21.2 million, reports Reuters.
The deadly virus surging in most of the nation is hammering parts of California most severely, including the Los Angeles metropolitan area, pushing hospitals to their limits.
Earlier this week, public health officials ordered the suspension of elective surgeries for at least three weeks in more than a dozen southern and central counties. Nevada, New Hampshire, Oklahoma and Pennsylvania logged their highest single-day death toll on Wednesday. The latest surge is compounded by the rapid spread of a new, highly transmittable COVID-19 variant that was first detected in the United Kingdom in December and has now spread to several US states, including New York .
The Pennsylvania Department of Health on Thursday announced the first confirmed case of the variant in Dauphin County, where an individual tested positive "after known international exposure."
With the strain on stretched healthcare systems increasing across the country, federal and local officials announced steps to speed the sluggish pace of inoculating eligible residents with two authorised coronavirus vaccines.
On Wednesday, top health officials announced plans to start distributing COVID-19 vaccines through pharmacies around the country earlier than expected this week as states have struggled to use up the supplies they have been allocated.
The lack of a federal blueprint for the crucial final step of getting the vaccines into tens of millions of arms has left state and local officials in charge of the monumental effort, creating a patchwork of different plans across United States.
The partnership with 19 pharmacy chains will eventually let the Operation Warp Speed vaccination program deliver to as many as 40,000 locations around the country, US officials said at a news conference on Wednesday.
US Health and Human Services Secretary Alex Azar also said at the news conference that states should not let recommendations to prioritise certain groups like healthcare workers slow the pace of vaccinations.
Azar urged states not to keep vaccines sitting in freezers too long for distribution to healthcare workers and has encouraged governors to skirt government recommendations for who should receive vaccines first if it can speed inoculations.
If states are struggling to distribute the vaccine, "then by all means you want to be opening up to people 70 and over or 65 and over," he said.
New Jersey Governor Phil Murphy said on Wednesday that vaccinations are now being offered to people in the 1b category outlined by the Centers for Disease Control and Prevention, including law enforcement and fire fighters, as well as other frontline essential workers.
Murphy said he anticipated there will be fluidity to inoculations, with several groups offered them at once to be sure no vaccine expires and is wasted.
"It is not necessary to vaccinate all individuals in one phase before moving on to the next phase," Judy Persichilli, the state's health commissioner, said at a news briefing alongside the governor.