Blood plasma reduces risk of severe COVID-19 if given early 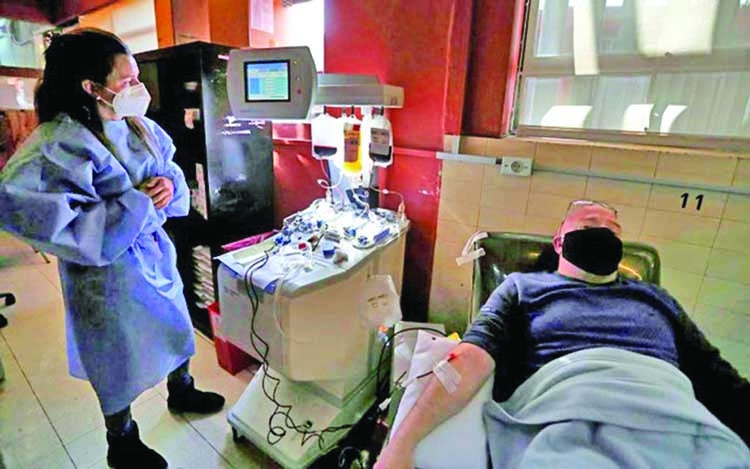 A patient recovered from COVID-19 donated plasma at the Hemotherapy Institute in La Plata, Argentina, in October. -Reuters
A small but rigorous clinical trial in Argentina has found that blood plasma from recovered COVID-19 patients can keep older adults from getting seriously sick with the coronavirus - if they get the therapy within days of the onset of the illness.
The results, published Wednesday in the New England Journal of Medicine, are some of the first to conclusively point toward the oft-discussed treatment's beneficial effects. They arrive nearly five months after the Food and Drug Administration, under pressure from President Donald Trump, issued the therapy an emergency green light for use in people hospitalised with COVID-19. Thousands of patients have received infusions of plasma in the months since, while researchers waited for the data. The new study is one of the first well-designed clinical trials to show that the therapy has some benefit. "That's kind of what we have been looking for, in terms of really having evidence," said Dr Boghuma Kabisen Titanji, an infectious disease physician at Emory University who wasn't involved in the research, reports The New York Times.
Convalescent plasma, the pale yellow liquid left over after blood is stripped of its red and white cells, teems with disease-fighting molecules called antibodies. Last summer, Trump hailed it as "a powerful therapy" made possible "by marshalling the full power of the federal government."
But the FDA's controversial stamp of approval, granted on Aug 23, was met with widespread criticism from researchers and health care professionals, many of whom decried the decision as political and lacking in scientific support.
At the time of the emergency authorisation, scant evidence pointed to the possibility that blood plasma might help people fight off the coronavirus. The treatment's benefits also seemed largely limited to patients who received their infusions within three days of diagnosis and hadn't yet experienced severe symptoms.
The new study, led by Dr Fernando Polack, a paediatric infectious disease physician and the scientific director of the INFANT Foundation in Argentina, appears to clarify the circumstances under which plasma has its perks.
In 80 people, an infusion of plasma decreased the risk of developing a severe case of COVID by 48%, compared with another group of 80 who received a saline solution instead, the study found. But the study's parameters were strict: Everyone enrolled in the trial was at least 65 years old - a group known to be at higher risk of falling seriously ill. About half of the participants also had health conditions that made them more vulnerable to the virus. And the plasma therapy, which was screened to ensure it contained high levels of antibodies, was always given within three days of when the patients started to feel symptoms.
"We went as early as we could," Polack said. Administering the therapy too late in the course of disease, he said, is akin to allowing a burglar to ransack a home for hours before deciding to call the police. An early dose, on the other hand, has the potential to nip a blooming infection in the bud.
"I think it's becoming clear now that the earlier you catch this infection, the more likely you are to stave off disease," said Dr Taia Wang, an immunologist at Stanford University who wasn't involved in the study.
Other trials testing convalescent plasma's effects in sicker patients have flopped, finding that the therapy did little to hasten recovery or prevent death - contradicting the treatment's emergency authorisation, which specifies use in hospitalised people.
Treatment guidelines published by the National Institutes of Health do not recommend for or against use of convalescent plasma, because of a paucity of data.
"I think this really validates a lot of what observational studies and clinical experience has been showing," said Dr Liise-anne Pirofski, a physician and immunologist at the Albert Einstein College of Medicine and Montefiore Medical Center who has led trials studying convalescent plasma, but wasn't involved in the new study.
Some experts pointed out that the benefits of convalescent plasma may be difficult to study and capitalise on, since most people's illnesses are too far along by the time they seek medical care.
It will be difficult "to find and diagnose them within that vanishingly small window," said Dr Ilan Schwartz, an infectious disease physician at the University of Alberta who wasn't involved in the study. "The study looks solid, but not necessarily practical in the real world."
Plasma has additional logistical hurdles, Titanji, of Emory University, said. The treatment is given as an intravenous infusion - a process that requires skilled hands - and patients need to be monitored afterward. That might be easier in long-term care facilities, but far tougher to accomplish for the general population, she said.