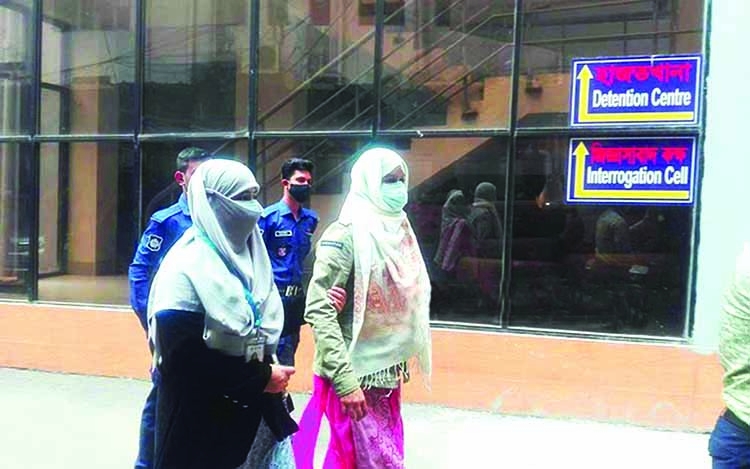 The Anti-Corruption Commission has been granted permission to interrogate Abantika Baral, a 'close aide' to Proshanta Kumar Halder, in connection with a case involving charges of illegal wealth acquisition and money laundering.Dhaka's Senior Special Judge Imrul Kayes passed a three-day remand order on Wednesday following her arrest by an ACC team led by Deputy Director Md Salahuddin earlier.
Although two lawyers representing Abantika submitted a "vakalatnama", a document authorising an advocate to represent a party in a case, they were not allowed to take part in the hearing as the document was not signed in accordance with with the prescribed procedure, ACC's lawyer Mahmud Hossain Jahangir said, reports bdnews24.com.
Following her arrest, Abantika was initially taken to the ACC headquarters in Segunbagicha before the investigation officer, Deputy Director Md Salauddin, took her to court around 2 pm."Abantika Baral's involvement was found during the investigation into the case against Proshanta, which is why she has been arrested," said the anti-graft agency's spokesman Pranab Kumar Bhattacharya.Responding to a question from reporters, Abantika said she did not know the reasons for her arrest.Asked about the charges of acquiring illegal assets, Abantika said, "The ACC knows ... I can't say anything."
Abantika had been summoned for questioning by the ACC on Dec 29 as part of the investigation into the case but she failed to turn up.Meanwhile, another 'associate' of Proshanta, Shankha Bepari, was also arrested on Jan 4 in connection with the case.According to the ACC, a lavish apartment has been found under the ownership of Shankha Bepari, which was bought with Proshanta's money.
Proshanta is a former managing director of the International Leasing and Financial Services Limited or ILFSL and NRB Global Bank. He is accused of embezzling funds and purchasing large shares while taking control of four financial institutions, in which he placed his close associates in positions of power.These companies are ILFSL, Peoples Leasing and Financial Services, FAS Finance and Investment Company.
Following complaints from the ILFSL clients, the ACC filed a case against Proshanta last year after he fled to Canada.The ACC said it could not find any 'legal source' of an investment of Tk 673 million made by Proshanta in eight companies under his and his associates' names.An investment of Tk 3 million in Sukhada Limited under the names of Abantika Baral, Pritish Kumar Halder and Sushmita Saha was originally made by Proshanta, according to the ACC.