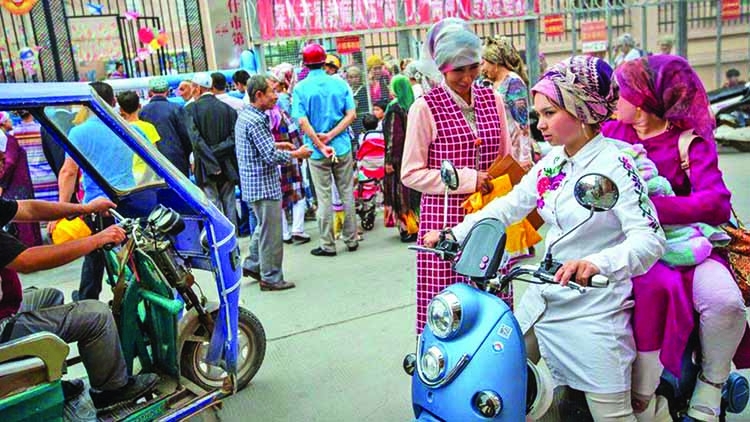 China's technology companies deny selling software that can be used to pick out Uighur people from the rest of the population by their appearance. -Getty
A Huawei patent has been brought to light for a system that identifies people who appear to be of Uighur origin among images of pedestrians.The filing is one of several of its kind involving leading Chinese technology companies, discovered by a US research company and shared with BBC News. Huawei had previously said none of its technologies was designed to identify ethnic groups. It now plans to alter the patent.
FORCED-LABOUR CAMPS:
The company indicated this would involve asking the China National Intellectual Property Administration (CNIPA) - the country's patent authority - for permission to delete the reference to Uighurs in the Chinese-language document. Uighur people belong to a mostly Muslim ethnic group that lives mainly in Xinjiang province, in north-western China.
Government authorities are accused of using high-tech surveillance against them and detaining many in forced-labour camps, where children are sometimes separated from their parents. Beijing says the camps offer voluntary education and training."One technical requirement of the Chinese Ministry of Public Security's video-surveillance networks is the detection of ethnicity - particularly of Uighurs," said Maya Wang, from Human Rights Watch.
"While in the rest of the world, such targeting and persecution of a people on the basis of their ethnicity would be completely unacceptable, the persecution and severe discrimination of Uighurs in many aspects of life in China remain unchallenged because Uighurs have no power in China."
Body movements
Huawei's patent was originally filed in July 2018, in conjunction with the Chinese Academy of Sciences .It describes ways to use deep-learning artificial-intelligence techniques to identify various features of pedestrians photographed or filmed in the street.It focuses on addressing the fact different body postures - for example whether someone is sitting or standing - can affect accuracy.
But the document also lists attributes by which a person might be targeted, which it says can include "race (Han [China's biggest ethnic group], Uighur)".A spokesman said this reference should not have been included."Huawei opposes discrimination of all types, including the use of technology to carry out ethnic discrimination," he said.
"Identifying individuals' race was never part of the research-and-development project."It should never have become part of the application."And we are taking proactive steps to amend it. "We are continuously working to ensure new and evolving technology is developed and applied with the utmost care and integrity."