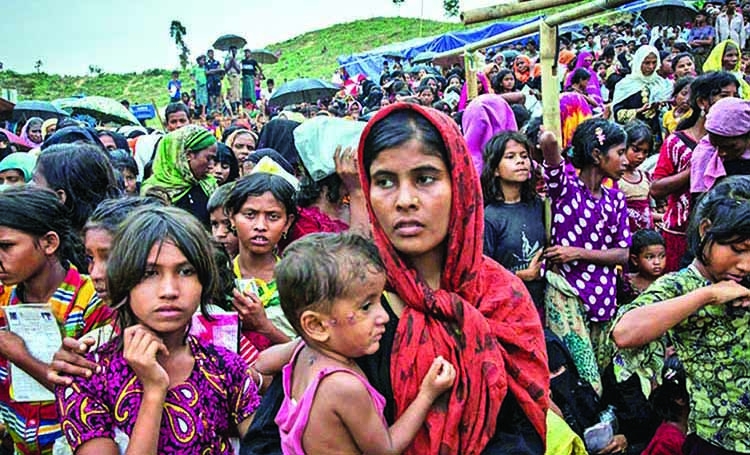 Bangladesh has been hosting more than 1.1 million Rohingyas who were forcibly displaced from their place of origin in Myanmar. -Agency
Bangladesh, China and Myanmar are going to sit in the capital on January 19 to discuss the Rohingya repatriation, said Foreign Minister Dr A K Abdul Momen on Wednesday.He was talking to reporters after attending Poush Utsab (winter festival) of Shurer Dhara at Lalmatia in the capital. The Foreign Minister said, "This time, it will be a secretary level meeting. We keep our hope very high."
He said that the tripartite meeting was supposed to be held this week but it is deferred to January 19 as the Chinese foreign minister is scheduled to visit Myanmar in the meantime.Delegations from China and Myanmar will be in Dhaka to hold the meeting with Bangladesh side, Momen added.Earlier, Beijing assured Dhaka that it would take initiatives to arrange the second round of foreign minister level 'tripartite talks' over Rohingya repatriation after Myanmar general elections that was held in November last.
The first such tripartite meeting among the foreign ministers of Bangladesh, China and Myanmar was held on the sidelines of the UN General Assembly in New York in 2019. Dr Momen said, so far, Bangladesh has handed over biometric data of 8,40,000 forcibly displaced Rohingyas to Myanmar authority."Earlier, we handed over around 6 lakh biometric data while, day before yesterday, we provided biometric data of 2,30,000 Rohingyas to them," he added.
Expressing his frustration, the minister said Myanmar authority so far verified only 42,000 biometric data out of 8.4 lakh. "It's unfortunate there is huge lack of (Myanmar's) sincerity," he said.A K Abdul Momen reiterated that repatriation is the only solution to end the Rohingya crisis. "There is no alternative to repatriation," he added.
Bangladesh is hosting over 1.1 million forcefully displaced Rohingyas in Cox's Bazar district and most of them arrived there since August 25, 2017 after a military crackdown by Myanmar, which the UN called a "textbook example of ethnic cleansing" and "genocide" by other rights groups.In last three years, Myanmar did not take back a single Rohingya while the attempts of repatriation failed twice due to trust deficit among Rohingyas about their safety and security in the Rakhine state - their land of origin.