Democracy in Myanmar still under threat 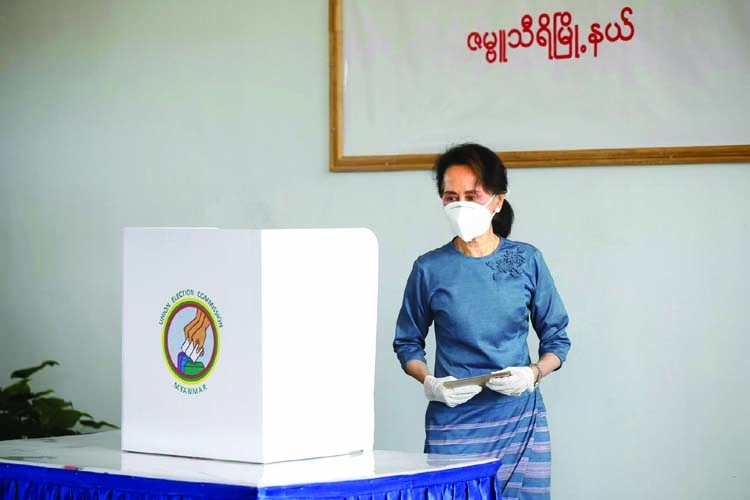 Myanmar State Counsellor Aung San Suu Kyi casts an advance vote ahead of November 8th general election in Naypyitaw, Myanmar, 29 October, 2020.
Myanmar State Counsellor Aung San Suu Kyi's National League for Democracy (NLD) secured a landslide victory in November's 2020 general election. The NLD's massive win was shocking even for close observers of Myanmar politics, who anticipated the party's popularity to take a hit after five years of controversial rule.
Since the NLD has been in power, Myanmar's nascent democracy has not met expectations. The country's human rights record has not improved, the peace process is stalled, and repression of government critics is continuing. Economic growth has slowed down due to the inefficient bureaucracy and volatile conflict situation. Pro-democracy activists are wary of Aung San Suu Kyi's growing authoritarianism while the international community now calls her a pariah.
The NLD did poorly in its 2017 and 2018 by-elections, a downward trend that was expected to continue. What does the NLD's electoral victory suggest about Myanmar's road to democracy?
Myanmar's democratic institutions are working relatively well. The Union Parliament (Pyidaungsu Hluttaw) has been one of the most active government institutions since its birth in 2011, which implies that parliamentary democracy is functioning. General elections are held every five years and, while there is still room for improvement, no significant electoral fraud, violence or manipulation were reported in November. The voter turnout of 71.6 per cent is also an encouraging sign, up from 69 per cent in 2015.
But other aspects of Myanmar's democratisation have regressed over the last five years. The government has tightened control over the media, causing overall freedom to decline and civil society space to shrink. Restrictive laws such as the Telecommunication Law, Unlawful Association Act and the defamation section in the Penal Code intimidate the media, while journalists have been detained for reporting on the conflict in Rakhine State.
The COVID-19 pandemic has also affected the electoral landscape, with domestic and international observers criticising the Union Election Commission for introducing restrictions on election campaigns and cancelling the vote in some townships in Rakhine, Shan, Kachin and Kayin states. Continued ethnic conflict presents another challenge. The violent situation in Rakhine State has not yet been contained. Although there was no visible political violence during the election period, following the election, a parliamentarian elected to the Amyotha Hluttaw (upper house) was killed in late November 2020. The Arakan Army, an insurgent group, and the Tatmadaw - the Myanmar military - agreed to hold a by-election in areas where the vote was cancelled, but the incident shows that national reconciliation will not be easy.
The main challenge for democracy in Myanmar is the constitution, which was developed under the close supervision of the outgoing military government in 2008. The process was criticised for its undemocratic procedure, and the document protects the Tatmadaw's influence over the country's governance.
This means the NLD victory does not guarantee the military will abandon politics, but a proxy political party may no longer be a viable option for it. Another unsuccessful electoral performance of the military-backed Union Solidarity and Development Party (USDP) may prove that voters do not trust parties associated with the military. After the election, the USDP filed more than 600 complaints regarding election fraud, but the Tatmadaw made clear that it will accept the election results. The poor performance of ethnic and alternative parties shows Myanmar is far from functioning as a plural society.
In the past few years, people have struggled to find alternatives to military rule, but no other parties performed better than the NLD or even the USDP except for the Arakan National Party and the Shan Nationalities League for Democracy. The waning popularity of the NLD in ethnic areas and the merging of ethnic parties meant they had high hopes in the election, but the winner-takes-all voting system, the NLD's incumbent advantage, and COVID-19 restrictions challenged ethnic parties. Many voters support the NLD for undoing the legacy of 60 years of military rule, but their strong performance in the election might be more indicative of popular support for their increasingly authoritarian leadership. The party's decision-making process has been further centralised, and seats on the NLD's Central Committee were filled without an election. Controversy over the naming of a bridge in Mon State in 2017 showed that the incumbent government is yet to embrace public opinion, especially from ethnic minorities. Too much power concentration in a particular political party and the cult of personality may lead to clientelism as seen in other early democracies in Southeast Asia.
The current snapshot of the country shows two sides of democratisation. Freedom House assessed Myanmar as 'not free' in 2020, and the government's weak performance led observers to warn that voters would become disinterested in politics and less supportive of political institutions. There are also practical issues to deal with, such as economic development and constitutional amendment. Economic growth has been sluggish since 2014, and the government faces challenges in dealing with COVID-19.
Still, the weak performance of ethnic parties does not necessarily represent a deepening of divisions. Recently, the ethnic parties promised to establish a democratic federal union in cooperation with the NLD government. Last but not least, while two previous attempts to amend the 2008 constitution were thwarted, the NLD recently signalled that the Tatmadaw would discuss constitutional amendments. The NLD and Aung San Suu Kyi have gained the momentum needed to push political reform at their own pace. A bigger share of the parliament will give the administration more leeway, but also the heavy burden of carrying forward political reforms.

Kihong Mun is a PhD candidate at the School of Social and Political Science, University of Sydney.