Songs across the starlit sky

One should always trying singing at times. It does something good to the soul. It elevates the senses, it rekindles the dying embers of lost romance and it makes one feel young, sort of, again. Now, these are some of the reasons why I have lately lost myself in song. No, let me not delude myself.
I have never played any musical instrument, though I have since childhood wanted to be a pianist or a cellist, preferably the former. I never got around to doing anything of the kind, though, for reasons that have had to do with family economy. Being poor or being insufficiently strong where money is concerned is a reality not many of us can easily run away from.
But, of course, I am digressing. The point now is that in this past fortnight I have given myself over to singing loud and perhaps hoarse because of the sheer joy remembrance of old songs causes to arise in my soul. There were certainly the moments when I lost the tenor of a song, the scale of it, especially when I went for a duet with a friend. We started off with a rather ancient Bengali duet and it seemed to go along rather well, until somewhere I forgot the tune.
That was heartbreaking, but the point is that we both burst out laughing even as the rays of the declining sun landed soft and silent on the fiery beauty of her ageless cheeks. The sheer spectacle of unalloyed feminine charm egged me on, into Nazrul’s ‘tumi shundor tai cheye thaki priyo’ . . . She closed her eyes. When she opened them again, dusk had already tiptoed into the room.
Songs bring back memories, often those that relate not just to you but, as well, to the generation that preceded yours. In my early years, my mother and my aunt both fell in love with ‘maa amar shaadh na mitilo’. They sang it over and over again, which is why every time I hear it these days it is those days of raw innocence, of black and white I go back to.
Much the same thing happens when I sing, or hear someone else hum Hemant Kumar’s ‘hai apna dil to awara’. A young fellow, a full-blooded Bengali who worked as domestic help in the family, went shopping for vegetables and fish in the morning with a long face but when he came back, he was singing, however little he knew of it, that Hemant song.
It is an association I have not quite been able to shake off. Neither have I forgotten that long-lost early February morning in my mother’s village on the banks of the Sitalakhya more than fifty years ago when my uncle, our Turan Mama, broke into a rendition of the Rafi number, ‘mohabbat choome jin ke haath / jawani paaon parhe din raat / sune phir hai wo kis ki baat’. A few nights ago, it was a prolonged shower I indulged in --- because I kept singing that song, trying to bring the right feel into it. I did the same with another Rafi song, ‘yaad na jaaye beete dino ki’.
It is thrilling, this thought of discovering yourself anew through old songs. S.D. Burman’s ‘banshi shune ar kaaj nai shey je dakatia banshi’ is redolent of melody you once tried seducing the neighbourhood girl, she with the long tresses and the dark eyelashes and the rose-tinctured lips, with. And then there are the moments of sadness as well; and they come when you find yourself staring wide-eyed, disbelieving, into old television footage of Mahmudunnabi singing some of his wrenchingly sad songs. Some nights ago, it was ‘mone to porhe na kono din aami-o je shilpi chhilam’.
Try humming it. You will likely cause scratches to run wild across your heart. It was a decade ago when, headphone in place, I heard the song, endlessly and as long as the flight I was on from London did not land in Dhaka. I have not forgotten that song. Now my little niece Binita has it recorded on her cell phone and lets me listen to it any time I am in the mood for some delicious sadness. By the way, another niece, the shy Suhani, sings on the harmonium when I am away.
My parents both sang in their moments of happiness when they were home. My father was obsessed with Jogonmoy and Talat Mahmood. My mother was more into Suraiya and Shamshad Begum, which is why many of the songs I sing these days have their roots in my ancestry, the immediate part of it. But let me make note of one song I would not have known about had I not heard M. Asafuddoulah sing it.
It was ‘ik bar muskura do / honton ki ik ada se sau bijlian gira do’. It was moving. The year was 1991. When in November of that year I travelled to Delhi for a media-related visit, the song played on my lips nearly the entire day. But as yet I had little idea who had sung the original. It was again Asafuddoulah who enlightened me, this time on a June evening in London. Jogonmoy’s was the original voice.
Let me sign off now? Ah, just remembered. Have you heard Abdul Jabbar’s ‘taara bhora raate / tomar kotha je mone porhe bedonaye go’? Pain seeps, drop by drop, into the cold, desolate gardens of memory.
The writer is Editor-in-Charge of the Asian Age 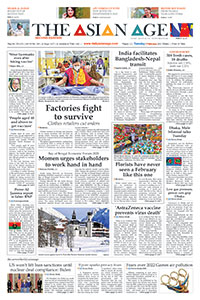