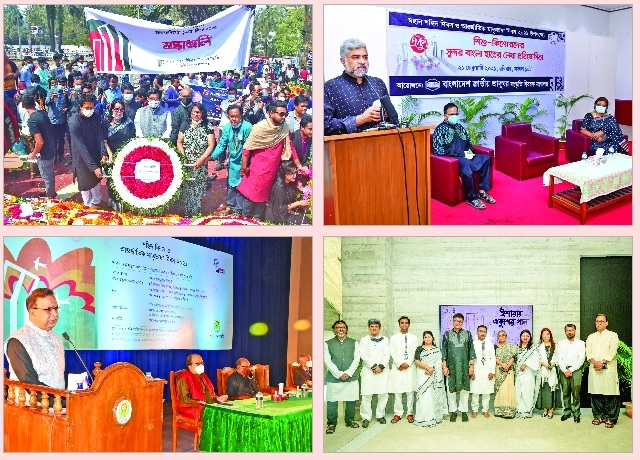 Immortal Ekushey February and International Mother Language Day were celebrated with due dignity on Sunday across the country, including the capital Dhaka, amid a pledge to resist communal evils. On this occasion, just as thousands of people came to the central Shaheed Minar in the early hours in the morning to pay homage to the language martyrs, and they also made the day memorable through various arrangements. On the occasion of the day, various government and non-government organizations also organized colorful programs.

Bangladesh Shilpakala Academy
Bangladesh Shilpakala Academy started celebrating Martyr's Day and International Mother Language Day 2021 in the morning with wreath-laying at the central Shaheed Minar, discussion and cultural program. Besides, in the afternoon there was an event titled 'Bangladesh will protect all mother tongues of the world'. Artists from different countries perform music, dance and recitation in this special event at the main auditorium of the National Theater with the song ' Amar Vaier Rokte Rangano Ekushe February'.

State Minister for Culture KM Khalid was the chief guest at the discussion titled 'Bangladesh will protect all mother tongues of the world'. Secretary of the Ministry of Culture Badrul Arefin was the special guest at the presidency of the Director General of the Academy Liaquat Ali Lucky.
On this event, music and dance performed by Dhaka Cultural Group and Bhangima Dance Group in 41 languages titled 'Bishwa Mayer Shuru Sangeet Bani'. Besides, artists from different countries of the world also took part in the cultural performance.

National Museum
Marking the Martyrs' Day and International Mother Language Day 2021, Bangla Handwriting Competition, Special Exhibition, Documentary Exhibition of Language Movement, Discussion Meeting and Special Prayer have been held at National Museum. In the morning, children's beautiful handwriting competition and special exhibition was held at Nalinikanta Bhattasali Exhibition Gallery. Khandaker Mostafizur Rahman, Director General of the Museum, distributed prizes among the winners of the Competition. 'Oshomapto Attojiboni', 'Karagarer Rojnamcha' and 'Amar Dekha Noya Chin' written by Bangabandhu Sheikh Mujibur Rahman, selected parts were use for handwriting competition. Students from class III to class X participate in this competition.
In the afternoon, a discussion meeting titled 'Bangladesh nurtured in the spirit of Bangabandhu and Ekushey' was held at Poet Sufia Kamal Auditorium. The main article was presented by Saeed Samsul Karim, Education Officer of the Museum. Director General of the National Museum Khandaker Mostafizur Rahman presided over the meeting. At the end of the discussion, special prayers were offered for the forgiveness of the souls of all the martyrs.

Bangla Academy
On the occasion of the day, Bangla Academy has given Amar Ekushey Lecture and Poet Jasimuddin Sahitya Puraskar. At the beginning of the event held at the Abdul Karim Sahitya Bisharad Auditorium of the Academy on Sunday morning, a minute of silence was observed in memory of the martyrs of the language movement. Director General of Bangla Academy Habibullah Siraji gave a welcome address in the presidency of Bangla Academy President Professor Shamsuzzaman Khan. Ekushey's lecture titled 'Bangabandhu's historic March 7th speech in UNESCO's World Heritage-Memorial List: A Social and Communication Analysis' was given by Prof. Dr. AAMS Arefin Siddique. State Minister for Culture KM Khalid was present as the chief guest.
Speakers and guests said that, the speech of Father of the Nation Bangabandhu Sheikh Mujibur Rahman given on March 7, 1971 is one of the best examples of energetic speech. What a speech inspired a nation to jump into the war of liberation is a rare event in the history of the world. The present government has been playing an effective role in building the country and the nation in the spirit of the liberation war with the promise of Ekushey.
Poet Jasimuddin Sahitya Puraskar-2021 was given in the last part of the event. This time the award has been awarded to the eminent writer, language activist Ahmed Rafiq. This bi-annual award is given to a renowned writer for his overall contribution in any branch of Bengali language and literature. Ahmed Rafique could not attend the ceremony due to physical illness.

Bengal Foundation
On Sunday, the International Mother Language Day, the song 'Amar Vaier Rokte Rangano Ekushe February' was illustrated in sign language and has been released on the online platforms of Bengal Foundation and UNDP Bangladesh. The event was held at the Bengal Shilpalay in the capital. UNDP Bangladesh Resident Representative Sudipta Mukherjee and Director General of the Bengal Foundation Luva Nahid Chowdhury were also present.
They said that, the purpose of our joint effort is to make people with speech and hearing disabilities feel this song with heart. They also said that, the national anthem 'Amar Sonar Bangla Ami Tomai Valobashi' will be filmed in sign language on Independence Day next March.