A reflection on the bilateral relations between Bangladesh and Japan 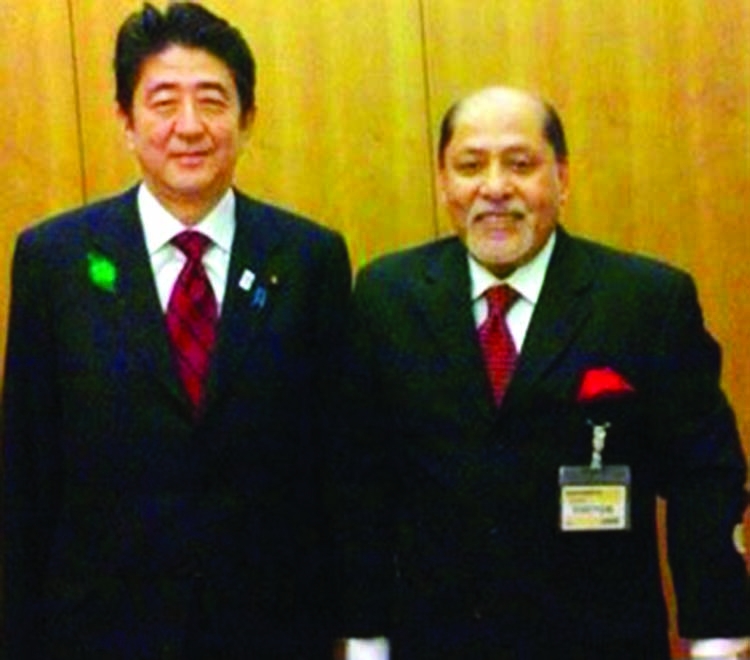 The writer is seen with the former Prime Minister of Japan Mr. Shinzo Abe at his office in Tokyo in 2016.
Today is the birthday of His Majesty Emperor Naruhito of Japan, an auspicious occasion celebrated as the National Day of Japan within the country as well as in the Japanese Missions around the world including in Bangladesh. The occasion is befitting for a reflection on the depth and dimensions of the bilateral relations existing between Japan and Bangladesh for nearly 50 years. But before I write on the bilateral domain, I wish to shed some light on a number of important aspects about the new Emperor and the imperial family.
The new Emperor, His Majesty Naruhito, was born on February 23, 1960. He acceded to the Chrysanthemum Throne on May 01, 2019 upon abdication by his father Emperor Akihito on April 30, 2019 - an event unprecedented in Japanese history in the last 200 years. His Majesty Naruhito is the 126th Monarch of an unbroken hereditary Shinto dynasty, which is descended from the Sun Goddess "Amaterasu", according to the Japanese legend. Upon his abdication Emperor Akihito assumed the title of Emperor Emeritus- mostly an honorific title and he will be known by that name upon his death. Emperor Naruhito has a PhD in history from Gakushuin University, Tokyo. He also spent two years studying at Oxford University, which made him the first member of the Japanese imperial family to pursue higher studies abroad. His wife, Empress Masako, was born on December 9, 1963.
She is a Harvard graduate in economics. A daughter of a former senior Japanese diplomat, she also joined the Japanese foreign service and did her post graduate studies in international relations at Oxford University for two years from 1988-90. After her marriage to then Crown Prince Naruhito in 1993, Empress Masako had to give up her successful diplomatic career and devoted herself to the designated royal duties. The Emperor and the Empress have a daughter, Aiko, Princess Toshi , born on December 01,2001. Although she is the only child of Their Majesties, Aiko, Princess Toshi is ineligible to ascend to the Throne, as Japanese constitution only allows male heir to the succession. Thus, Emperor Naruhito's younger brother Crown Prince Akishino's son, 14-year-old Prince Hishahito, who is second in line for succession, will eventually ascend to the throne.
The emperor of Japan, although is the Head of the State, remains disengaged from the frays of national politics. He not only serves as a symbol of the nation and unity of the people, but is also held in great reverence by the people of Japan. For Japanese people it had long been considered a sin to touch the emperor or look at his face. However, the imperial family after World War II has gone through phenomenal changes to be closely in touch with the general mass; and family members are often seen standing beside the people whenever a disaster hits the country. The emperor performs a number of state duties as stipulated in the constitution. The other members of the imperial family, including the Empress, have their duties elaborately outlined under the imperial household guidelines. In order to celebrate the birthday of their beloved Emperor, Japanese people, including many travelling from the far-flung areas from Tokyo, will gather around the Chrysanthemum Palace early in the morning on the day, and in a concerted move bow their heads towards the Palace lowering them at waist level, while waving tiny Japanese flags. The Emperor, accompanied by the Empress and several other members of the Imperial family, will appear on the balcony of the palace to acknowledge birthday wishes from citizens.

Japanese Writing about Bangladesh
The leading Japanese personality who had also been a pioneer in writing about Bangladesh is Takashi Hayakawa, who was a former minister and member of the Japanese Parliament, led the Japan-Bangladesh Parliamentary League until his death. His book on Bangladesh was published in Japan in the late 1970s. It has been translated into Bengali by another patron of Bangla language and friend of our country, Kazuhiro Watanabe, former head of NHK Bengali Broadcasting. Watanabe since then has translated from Japanese a book on the 1977 Japan Airlines hijack written by former Japanese cabinet minister Hajime Ishii. The plane landed at Dhaka airport and Ishii was sent to Bangladesh by the Japanese government to negotiate the release of passengers. Watanabe later translated into Japanese the "Unfinished Memoir" of Bangabandhu Sheikh Mujibur Rahman.
Ambassador Matsushiro Horiguchi has written a book on Bangladesh History, which was published in Japan by a leading academic publisher Akashi Shoten. Akashi Shoten has also published a book on Bangladesh entitled "Bangladesh in 66 Chapters", which has been edited by Professor Masaaki Ohashi. It was first published in late 1990s and since then two more revised editions have been published. (To be continued...)


The writer has served as Bangladesh Ambassador to Japan from 2006-10.