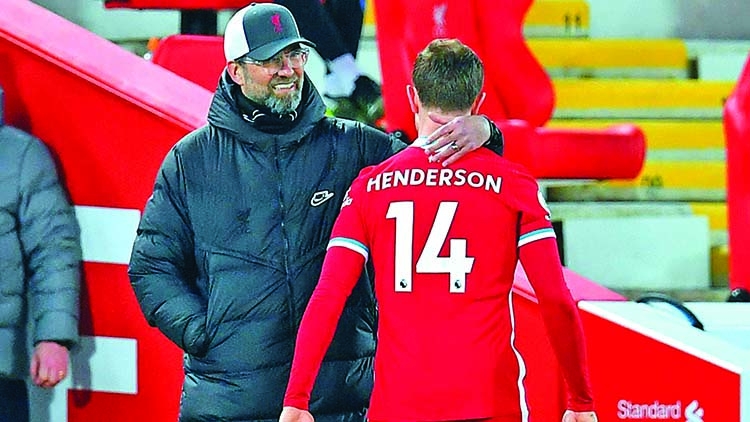 Jordan Henderson is ruled out for the foreseeable future after surgery on a groin problem. -PA
Liverpool manager Jurgen Klopp says he does not need to rebuild his squad in the transfer window, keeping faith in the players who delivered the Merseyside club's first English top-flight title in 30 years last season. Liverpool ripped up the record books in the 2019-20 campaign, but a season marred by injuries and poor form has left them sixth in the table with 40 points from 25 games, 19 points behind leaders Manchester City.
Captain Jordan Henderson, who has been deputising in Liverpool's defence, became the latest player to join the club's injury list, with the England midfielder ruled out until April after undergoing groin surgery. Central defenders Virgil van Dijk and Joe Gomez are likely to miss the rest of the campaign with knee problems, while Joel Matip has been ruled out until next season. Fabinho (muscle), Naby Keita (ankle) and James Milner (hamstring) are also sidelined.
Klopp said the sheer number of injuries had prevented him from playing his strongest team. "I don't think it is time for a massive rebuild like how I understand it, [which is] six or seven out, running contracts, but trying to get rid of them and bring in all the new faces," Klopp told a news conference ahead of Sunday's trip to Sheffield United.

"The squad this year didn't have the chance to play together one time really. I think it would make sense to have a look at that, but on top of that, of course, little readjustments will happen."Reacting on the situation but planning at the same time for the future and all these kinds of things. I am not sure we can do that in the summer but that is what we will try."
---Reuters, London