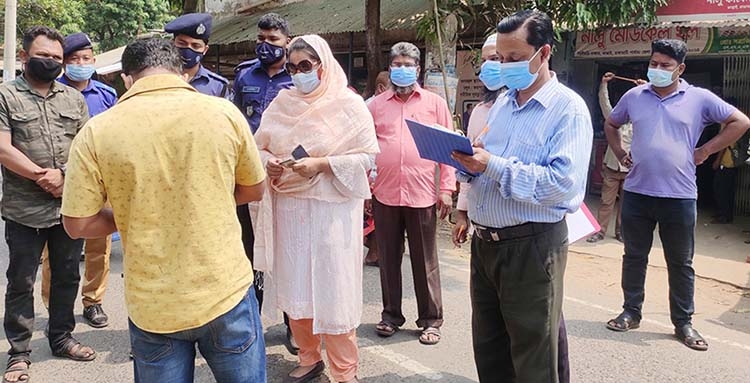 On the third day of lockdown in Kaptai of Rangamati, the upazila administration has been conducting drive and mobile court to curb corona infection.Kaptai Upazila Nirbahi Officer (UNO) Muntasir Jahan conducted a mobile court at Baraichhari Bazar and Kaptai road areas from Wednesday morning till noon.
During the drive, she filed four cases under various sections of the Road Transport Act 2018 and fined Tk 3,400 in 7 cases for violating government directives and keeping shops open.The mobile court conducted in the last two days has created a lot of awareness among general people. Most of the people are using masks, the sources said.
Kaptai Police Sub-Inspector Rakibul Hasan and Upazila Nirbahi Office's Office Super Sirajul Islam assisted the mobile court.UNO Muntasir Jahan told reporters present during the drive that, it was the success of the administration to put mask on people's faces. She urged the people to put on masks full-time during moving around and not to wander outside unnecessarily.
Meanwhile, Kaptai Police Station conducted a publicity campaign at the weekly hut Baraichhari Bazaar. Police personnel led by Officer-in-Charge (OC) Md Nasir Uddin led the campaign. It is mentionable that, since the beginning of the lockdown, the members of the upazila administration and law enforcement agencies have been conducting mobile courts as well as campaigning to abide by the government directives. This has created a lot of awareness among the people.
---M Nazim Uddin in Rangamati